Remember how I recently mentioned in my Alice in Vapeland review about how I discovered the company through a thread on Reddit? Well, Alice in Vapeland wasn’t the only company cited for having truly premium products and excellent customer service in spite of their lower prices. Indigo Vapor was the other — and I hadn’t heard of them before, either. I naturally had to ask whether Indigo Vapor made review samples available to websites such as mine, and within just a couple of days I had a very generous package waiting for me.

Indigo Vapor has a wholesale program, so you can find their e-liquids on a few third-party websites and some local vape shops. You can also see the full selection of Indigo Vapor e-liquids by simply visiting the official website.

Buy From Indigo Vapor: $9.49 per bottle and up. Indigo Vapor significantly discounts the price per ml if you buy larger bottles or assortments. 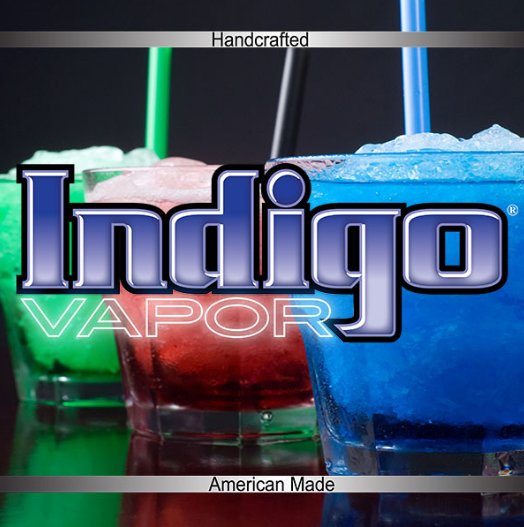 The flavor selection at Indigo Vapor is enormous. I count no less than 18 tobacco flavors, 17 fruit and ice flavors and 14 flavors in the “Indulge” category. There are also nine limited edition “Reserve” flavors at the time of writing. Since there’s so many flavors from which to choose, affordable sample packs are available. I think that the sample packs might be especially useful for people who prefer tobacco flavors, since no two people want exactly the same thing from a tobacco e-liquid.

I SMOKED MARLBORO LIGHTS FOR 34 YEARS(FROM AGE 15) WAS NEVER ABLE TO QUIT, INDIGO VAPOR’S THE DUKE HAS ENABLED ME TO QUIT, SMOOTH, LIKE A FRESH CRISP PACK, JUST OFF THE PRODUCTION LINE BUT MUCH CLEANER AND A DISTINCT HONEY SWEETNESS…

The praise continues. When I looked over Indigo Vapor’s flavor selection, I found quite a bit of variety. Obviously, the selection of tobacco flavors is very large — but that isn’t all Indigo Vapor does. You can find a great many individual fruits and fruit combinations, and a great many delicious sounding dessert e-liquids. There’s cereal flavors, baked good flavors — you name it. I even found an example of a custom flavor that Indigo Vapor created and added to its product lineup simply because a customer requested it.

My Indigo Vapor review sample included no less than 11 different flavors. In the package, I received the following:

Based on this enormous selection, I believe I’ve been able to formulate a pretty good idea of what Indigo Vapor is all about. Obviously, you can tell from the website that Indigo Vapor prioritizes tobacco flavors pretty heavily. All of the tobacco flavors that I tried were very sweet with the exception of The Duke, which was somewhat less so. All of the Indigo Vapor e-liquids that I tried were also heavily flavored. If you’re using a sub-ohm vaping setup, you probably love strongly flavored e-liquids anyway. If you’re not a cloud chaser, you may still prefer the stronger flavors since mild flavors sometimes have trouble coming through on devices with lower vapor output.

My favorite e-liquid from Indigo Vapor is Battered Berry. This flavor is meant to resemble a vanilla cupcake with blueberry frosting, and it does the job admirably. The combination of baked goods and blueberries isn’t exactly new in the e-liquid world; Mad Hatter also has a similar flavor called I Love Donuts. I think that Battered Berry may actually be better, though — it’s absolutely delicious.

Cereal Geeks is another favorite. Cereal e-liquids are all the rage right now, and Cereal Geeks attempts to emulate the flavor of Franken Berry — one of the incredibly popular “monster cereals.” Out of all the cereal e-liquids I’ve ever tried, Cereal Geeks probably emulates its target flavor most perfectly.

If you like cereal or blueberry dessert e-liquids, you need to run to Indigo Vapor right now — I mean it, now — and buy both of the above flavors. They’re terrific.

I love to try great tobacco flavors, even if I wouldn’t normally buy them myself. I’ve been vaping for so long now that I’ve lost my taste for tobacco completely, and an occasional taste when I write a review is good enough. If you prefer tobacco flavors and don’t care for the ashy, herbal flavors of NET e-liquids, you may really like Indigo Vapor’s tobacco selection. They’re much sweeter and highlight the nutty, savory notes of tobacco instead.

My personal favorite was Uncle Cutty, a flavored tobacco blend. Uncle Cutty absolutely dead-on nails the flavor and aroma of cherry pipe tobacco like no e-liquid I’ve ever tasted before. I mean, you really can convince yourself that the flavor is absolutely real. It’s quite remarkable.

I also liked The Duke a lot. Its sweetness is muted compared to Indigo Vapor’s other tobacco e-liquids, which I think is perfect because cigarette tobacco isn’t that sweet to begin with. This is a good, solid tobacco flavor that for many people could easily replace analog cigarettes.

As much as I enjoyed Uncle Cutty and The Duke, I wasn’t wild about the Indigo Vapor tobacco e-liquids that used RY4 — or anything similar — as a flavor element. For those of you who aren’t familiar with RY4, it was one of the original e-cigarette flavors that Ruyan — the first company to market e-cigarettes — developed. RY4 approximates the flavor of tobacco with flavor notes such as caramel, vanilla and a certain non-specific nuttiness. Personally, I found the sweetness of Indigo Vapor’s RY4-type blends just a little too overpowering.

Indigo Vapor’s flavors are big, bold and sweet. If those are the qualities that you like in your e-liquids, this is a company that you definitely need to try. Although I found the sweetness a little overpowering in some of the tobacco e-liquids, the Battered Berry and Cereal Geeks e-liquids — two flavors in which I’d expect a lot of sweetness — were spot on perfect.

When you do find a flavor that you love, you won’t pay a lot for it. Indigo Vapor’s bulk price when you buy a 120 ml bottle is just over 51 cents per ml. It’s hard to beat that. Indigo Vapor’s e-liquids don’t taste like budget e-liquids — they’re just priced that way.