These days, it often appears as though everything in the e-cigarette industry is getting bigger — bigger boxes, bigger bottles of e-liquid for less money, bigger rebuildable atomizers with more coils. Is a huge box mod really the perfect solution for every experienced e-cigarette user, though? Although the vaping community has no shortage of cloud chasing enthusiasts, I am not one of them. While I outgrew eGo-type devices long ago and now prefer a sub-ohm vaping setup, a 200 watt box mod is simply overkill for me. I’m completely happy using my sub-ohm tank at around 25 watts. If your preferences are similar, the new VaporFi VOX Mini 40 might be the ideal device for you.

About the VaporFi VOX Mini

So, the VOX Mini is a bit of a compromise — you can’t use it above 40 watts, but sub-ohm tanks typically don’t work at that power level anyway without dry hits. You can’t swap out the battery, but the VOX Mini works while charging. In return for compromising a bit on the device’s maximum power and battery flexibility, you get one of the smallest and lightest box mods on the market that’s still built from durable materials and sub-ohm capable.

With the full VOX Mini kit, you get your choice of three tanks: the Volt Hybrid tank, the VaporFi Rebel tank or the VaporFi Vice tank. Out of the three, I suggest picking the Volt Hybrid tank as it is the sub-ohm tank that I personally prefer for daily use. The Volt atomizer coils are affordable and generate prodigious vapor, and I especially like the organic cotton wick material. The Rebel tank is excellent as well, but it doesn’t use sub-ohm atomizer heads so the vapor production is quite a bit lower. At the time of writing, I have not yet had an opportunity to give the Vice tank a try.

The VOX Mini features the same 35 amp, 2500 mAh battery used in the VOX II, but it can’t be removed — at least, not easily. The device does have two hex screws on the bottom, which might make it possible to install a new battery if you needed to. I didn’t test this hypothesis, though. 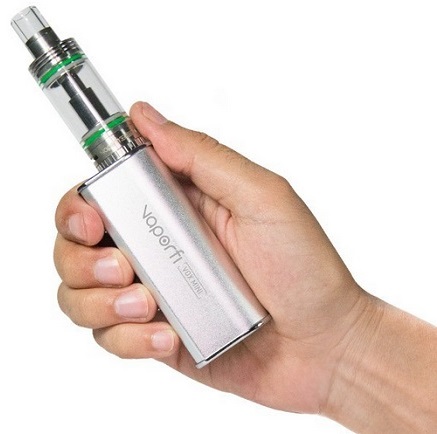 As I typically do with new products, I made the VaporFi VOX Mini my full-time device for a few weeks in preparation for this review. My first impression of the device was that it is really quite a lot smaller and lighter than you’d think from looking at the pictures. In practice, it feels barely larger than something along the lines of an eGo e-cigarette, but an eGo will never give you anything close to 40 watts — a standard eGo battery actually gives you about a quarter of that.

As I mentioned above, I use the VaporFI Volt Hybrid Tank daily. The tank produces as much vapor as I want and holds plenty of e-liquid. I also appreciate the fact that the organic cotton coils are quite affordable. One thing I’ve never done, though, is push the Volt Tank to the 50 watt limit imposed by the VaporFi VOX II mod. For me, the tank’s sweet spot is actually much lower — around 25 watts. Too far above that, I start to taste off flavors from the wick running dry.

What this means, of course, is that I don’t actually need the full power of the VOX II. The VOX Mini can give me exactly the same experience, with the same battery life, at a much smaller weight and size — and in my testing, the experience was the same. At the same wattage setting, I was unable to detect any difference in performance between the VOX II and the VOX Mini.

I found the smaller size and weight of the VOX Mini to be a significant upside. It’s very easy to carry the VOX Mini in a pocket, for example, and it doesn’t compromise on satisfaction the way a very small e-cigarette such as an eGo might.

On the other hand, with devices such as the VOX II, I have become accustomed to always having a spare battery in a charger and ready to go when the battery I’m using is low on power. A device with a fixed battery doesn’t give you that option, and I’m not always at a computer with a USB port handy.

If this limitation is a concern for you, you might try the solution that I use — I have a portable USB battery by Jackery that I use to keep my mobile devices topped up. When the VOX Mini battery is low, I simply connect it to the backup battery, which fully charges the VOX II in a couple of hours. Since the VOX II battery has a capacity of 2500 mAh, I’ve never had to worry about the battery dying while I’m out of the house.

An added feature of the VaporFi VOX Mini is the fact that it automatically enters standby mode when it hasn’t been used for a while. To exit standby mode, simply press the fire button five times quickly. This is the first device I’ve used to date with this feature, and it makes perfect sense given the highly pocketable size — there’s almost no chance of the device firing accidentally while I’m out and about.

If you’re tired of carrying large, boxy devices around — or have no interest in owning a large e-cigarette at all — but want something that delivers almost all of the power, the VaporFi VOX Mini is a terrific choice. The VOX Mini is incredibly small and light, and the 40 watt power range is more than most e-smokers need. Even with nearly constant use, you’ll generally only need to charge the battery once per day.