In order to understand what the Vapor4Life disposable e-cigarette is all about, you need to begin with a history of Vapor4Life itself. This is a company with a founder who smoked for 40 years. Apparently, between his 4-6 pack per day smoking habit and related medical bills, he was spending upwards of $30,000 per year. He discovered e-cigarettes in 2008 and never smoked another cigarette. At that point, he set about designing an improved e-cigarette with the features that would keep him from craving tobacco forever. That product was the original Vapor4Life Vapor King e-cigarette — a product that still exists today.

Vapor4Life began doing business in 2009, making them one of the few e-cigarette companies still in business today that launched before I became an e-smoker myself in 2010. I still have yet to try the original Vapor King. Being one of the first companies to use cartomizers in its e-cigarettes, though, must have given Vapor4Life quite a head start.

Vapor4Life continues to sell somewhat unusual products today compared to other companies. Take the WOW Vapor V-Kit, for example. It’s based on the Vapor Zeus e-cigarette, which looks like a standard e-cigarette with twist-on cartridges. The difference is that it’s much larger — similar in size to a cigar. Since it uses 5.0 volt batteries, it puts out an impressive amount of vapor for a small thing. Even the cartridges are unique — they have silicone tips, so you can chomp on them as much as you like. Lastly, every cartridge or bottle of e-liquid for the V-Kit includes a free vial of zero-nicotine e-liquid in the same flavor. Using the non-nicotine e-liquid, you can either adjust the nicotine strength of your cartridges or work toward the goal of becoming nicotine-free. 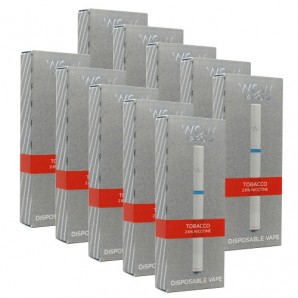 Recently, I’ve preferred mostly sweeter e-liquids. For me, reviewing the Vapor4Life disposable e-cigarette was a bit of an eye-opener. Although e-liquids with tobacco extracts are available, they still only replicate the flavor of tobacco. Tobacco smoke, though? Almost no one even tries anymore because smoke is a really difficult flavor to mimic without combustion. I’m not saying that the Vapor4Life disposable e-cigarette is an exact match for real tobacco smoke. I’m just saying that if any product has some closer, I haven’t found it.

In spite of the cost, it’s hard for me not to recommend the Vapor4Life disposable e-cigarette. This is especially true if you’ve disliked other e-cigarettes because they didn’t do a good job of replicating the real smoking experience. From the squishy feel in the hand to the blast of smoky nicotine hitting the lungs, that’s exactly what the Vapor4Life disposable e-cigarette does. You won’t find anything quite like it anywhere else.