Since the FDA announced its intention to regulate e-cigarettes, the industry has been in a state of flux. While e-cigarette companies have tried for years to distance their products from tobacco cigarettes, the possibility exists that e-cigarettes will be lumped in with tobacco products and vilified either way. Nations and states are eyeing e-liquid as an important potential source of revenue and are trying to impose taxes upon it.

If e-liquid is taxed as heavily as tobacco, the price disparity between cigarettes and e-cigarettes — one of the primary reasons why some people switch — could narrow or disappear. What would you do if that happened? Would you continue buying e-liquid at a higher price, or would you return to smoking — or would you look for something that strikes a middle ground? The V2 Pro Series 7 vaporizer is a device intended to stay with you no matter how the laws — or your preferences — may change. With its interchangeable cartridge system, the V2 Pro Series 7 is able to vaporize e-liquid, dry herbs or essential oils and waxes.

View the V2 Pro Series 7 at the V2 Cigs website or shop in Europe. The V2 Pro Series 7 costs $169.99 and includes cartridges for e-liquid and dry herbs. It includes a limited six month warranty, ships free domestically and can not be discounted with any coupon code. 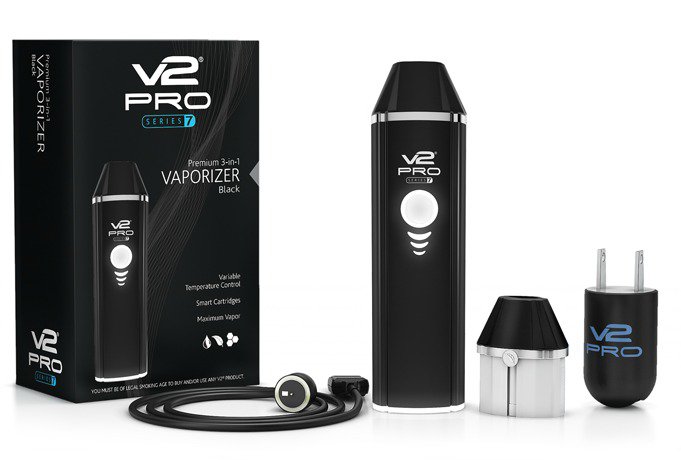 About the V2 Pro Series 7 Vaporizer

If you’ve ever seen a portable dry herb vaporizer, you’re probably aware that these devices often have fairly wide mouthpieces. E-cigarettes, on the other hand, tend to have more narrow tips. The V2 Pro Series 7 mimics the design of the former, and in fact has the widest mouthpiece of any e-cigarette I’ve ever used. Some people may prefer this design, while others will not. Either way, this aspect of the design definitely merits mentioning.

As expected for a device of its size, the V2 Pro Series 7 produces a ton of vapor. While the temperature control settings seem mainly irrelevant for the e-liquid cartridge — the Series 7 doesn’t get anywhere near hot enough to burn the e-liquid, even at the highest setting — I can definitely see how it would be useful for vaporizing dry herbs. The Series 7 has an extremely high capacity battery and will outlast anything other than the largest personal vaporizers, while the e-liquid cartridge holds more liquid than many tanks.

Using the V2 Pro Series 7 as an e-cigarette, I was slightly hampered by the somewhat small air vents on the sides of the device. You see, as I’ve moved to vaporizers such as the VaporFi VOX II with ever increasing vapor production, I’ve begun to inhale vapor directly into my lungs because the mouth simply doesn’t hold all of the vapor my device produces. If you prefer to draw vapor into your mouth before inhaling it, this won’t be a problem for you. If you prefer to inhale directly into the lungs, though, you may want an e-liquid tank with more of an open air vent such as that of the VaporFi Volt Hybrid Tank. 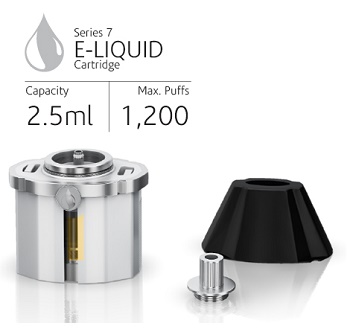 If you prefer to vaporize loose leaf tobacco or dry herbs, I think you’re going to be very happy with the balance that the V2 Pro Series 7 strikes between size and performance. This will be particularly true if you have any experience with the large battery-powered vaporizers that were popular a few years ago.

In the early 2010s, it wasn’t uncommon to see vaporizers upwards of a foot in length that barely held a usable amount of material and only had enough battery life to last through a single short vaporizing session. As the e-cigarette and vaporizer industries have come together, these shortcomings have become a thing of the past. The V2 Pro Series 7 has a massive herb chamber and battery life far, far superior to that of the dry herb vaporizers from a few years ago. It also does a good job of producing enough heat to vaporize the contents of the chamber fully without burning them.

As a multi-purpose vaporizer — and particularly as a vaporizer for loose leaf tobacco and dry herbs — the V2 Pro Series 7 is a winner. Unlike the experience you’d have with many smaller vape pens, the Series 7’s temperature control function gives you some flexibility over the heat and amount of vapor without burning the material and essentially becoming an unfiltered cigarette. If you’re currently using a small e-cigarette, you can be confident that upgrading to the V2 Pro Series 7 will give you drastically increased vapor production while retaining the flexibility to vaporize other forms of nicotine if e-liquid should become too expensive due to taxation.

On the other hand, I’m not certain that the V2 Pro Series 7 is the best choice if you are only interested in a vaporizer for e-liquid. At $169.99, it costs just slightly less than the VaporFi VOX II kit, which produces far more vapor, has a higher-capacity battery and is far more flexible in terms of its power settings and the tanks and atomizers with which it is compatible. If you inhale directly into your lungs, the poor airflow of the V2 Pro Series 7 e-liquid cartridge can hamper vapor production — the cheaper V2 Pro Series 3 actually has better airflow for e-liquid vapor.

View the V2 Pro Series 7 at the V2 Cigs website or shop in Europe. The V2 Pro Series 7 costs $169.99 and includes cartridges for e-liquid and dry herbs. It includes a limited six month warranty, ships free domestically and can not be discounted with any coupon code.