Based in Florida, South Beach Smoke is one of America’s oldest and best-known e-cigarette companies. In fact, I wrote my first review of the company back in 2012 when I first launched this website. The review wasn’t entirely positive. At the time, I thought that South Beach Smoke suffered from a lack of product differentiation compared to my favorite cig-a-like company, V2 Cigs. I also thought that aspects such as the price and warranty weren’t quite competitive enough to recommend South Beach Smoke over other companies. Since then, though, South Beach Smoke has formed a sister company — VaporFi — which has become my favorite of all e-cigarette companies. In light of my positive VaporFi reviews, the company got in touch with me to see if I’d be interested in giving South Beach Smoke another chance. Apparently, some of the positive things learned from the VaporFi launch have been carried over to the older company, which has become stronger as a result. So, after spending some time with the kit and its related accessories, here is my updated South Beach Smoke review for 2015. I hope that you find it useful.

View the South Beach Smoke website. Kits start at $39.99 and include a 30 day money-back guarantee and lifetime warranty. If you are a new customer, use the coupon code VAPE4LESS for a 15 percent discount on your first purchase. 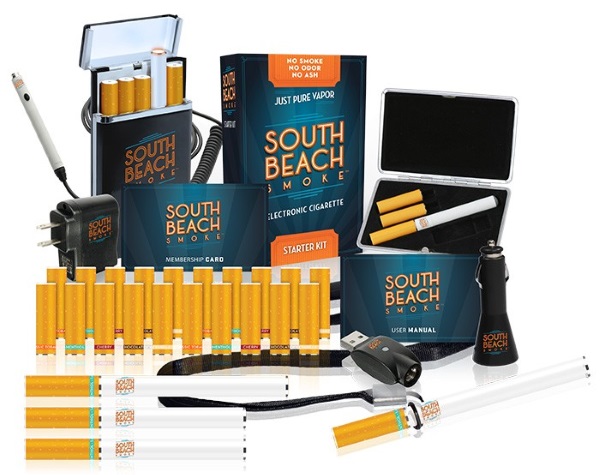 As I mentioned above, South Beach Smoke is one of America’s oldest e-cigarette companies. In fact, the domain dates back to mid-2010. Back then, South Beach Smoke sold a three-piece e-cigarette with a standalone atomizer and disposable plastic cartridges. South Beach Smoke evolved with the times, though, and eventually switched to a two-piece design with cartomizers, which is where the company stands today. Product improvements since then have been incremental, with changes to the company’s warranty and guarantee policies as well as in the packaging of its refill cartridges. South Beach Smoke has also moved its e-liquid manufacturing facilities to the United States. Through the years, South Beach Smoke has bucked the trend of lowering prices while offering customers less. I find it amazing that in 2015, it is still possible to buy an e-cigarette starter kit with a warranty of 30 days or fewer. That’s the kind of warranty you can expect from a company with no interest in retaining your business after the initial purchase, and avoidance of that attitude is why South Beach Smoke still exists today while so many other e-cigarette companies have disappeared. 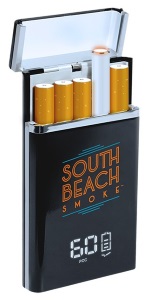 South Beach Smoke kits start at $39.99. For this price, you’ll receive two crystal-tipped automatic batteries, ten refill cartridges and USB and wall chargers. Higher-end kits are also available and feature additions such as carrying cases, portable charging cases, lanyards and car adapters. If you’re already familiar with smaller e-cigarettes and want to upgrade to a vaporizer with increased battery life and vapor production, South Beach Smoke also has a unique Custom Vaporizer Builder that allows you to craft your own vaping setup from scratch.

At the time of writing, South Beach Smoke sells refill cartridges in 16 flavors starting at $39.99 per 15-pack. Discounts are available if you buy in bulk or sign up for the home delivery program, which ships cartridges automatically each month at 20 percent off. Many more e-liquid flavors are also available by the bottle for vaporizer and tank users.

The flavor variety that South Beach Smoke offers in its pre-filled cartomizers is just about unparalleled in the vaping industry. V2 Cigs, for example, offers only 12 flavors — and there’s more. South Beach Smoke also offers a custom blending service that allows you to create your own e-liquid flavor and have it mixed for you — in the United States. That’s right — South Beach Smoke is one of the few mainstream, full-service e-cigarette companies that mixes all of its e-liquids in the United States rather than having them shipped from China. The difference in flavor quality is evident.

In my testing, the South Beach Smoke automatic batteries performed flawlessly. The sensitivity of the batteries is spot-on. While the batteries never triggered inadvertently — from being carried in my pocket, for example — I also didn’t need to take extensive “primer puffs” to get a sufficient amount of vapor. 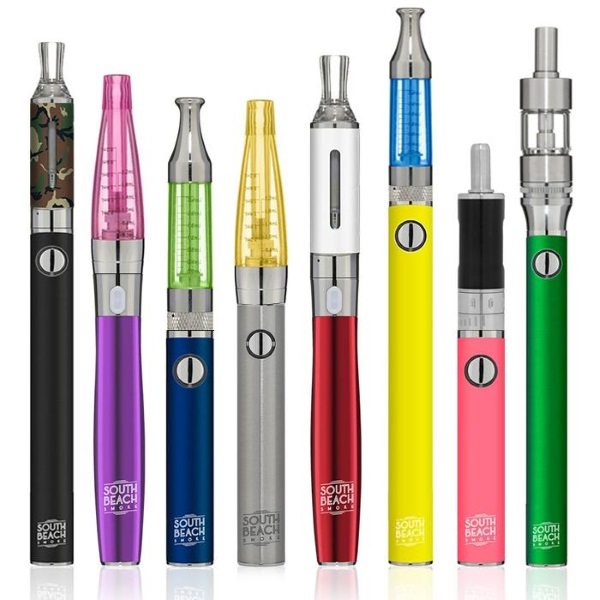 Ultimately, I see the KR-808 e-cigarette industry as a competition between South Beach Smoke and V2 Cigs. South Beach Smoke presents its case by featuring USA-made e-liquids, flawless performance and a truly exceptional value in its competitively priced starter kits. Starter kits from V2 Cigs tend to cost a bit more for similar components. In addition, at the time of writing V2 Cigs still uses imported e-liquids. However, comparing the South Beach Smoke e-cigarette to the more recently developed V2 Cigs EX series, South Beach Smoke has a certain feeling of “oldness.” The V2 Cigs EX batteries look nicer and last longer, while the EX cartridges offer a smarter design with their clear windows and lack of filler material. I also find V2’s selection of storage and charging cases to be superior to those offered by South Beach Smoke, although that’s largely a matter of personal preference.

If you’re looking for a company from which to buy your first e-cigarette, you can expect to have an excellent experience regardless of whether you choose V2 Cigs or South Beach Smoke. While the V2 Cigs e-cigarette is sleeker and has a superior selection of accessories, it also costs significantly more. South Beach Smoke, on the other hand, is a little more utilitarian but the kits present a better value. V2 Cigs batteries and cartridges last a bit longer and generate a little more vapor, but South Beach Smoke’s e-liquids are locally sourced and taste better. Either way, you’re likely to be very happy with your purchase.

View the South Beach Smoke website. Kits start at $39.99 and include a 30 day money-back guarantee and lifetime warranty. If you are a new customer, use the coupon code VAPE4LESS for a 15 percent discount on your first purchase.