I have long thought that connectivity with mobile devices might be one of the features that people look for in advanced personal vaporizers in the near future. When I made the switch to e-cigarettes, I noticed — and I’m sure I’m not the only one — that after some years I was probably puffing on my e-cigarette more times per day than I had ever puffed on tobacco cigarettes. Although I was fairly certain that I was consuming less nicotine overall, I wasn’t absolutely positive and wanted to cut down on my number of puffs each day. I tried tallying my puffs manually but always forgot to keep track. I contacted SMOK about the BEC Pro APV, figuring that if I had an interest in a Bluetooth e-cigarette, some of my readers might, too. Having used the BEC Pro exclusively for several weeks, I can say that it is a spectacular e-cigarette and well worth the price. However, the Bluetooth functionality still has some kinks to iron out.

As of 2015, the functionality of the BEC Pro has become a bit outdated. Due to this and the fact that I was never able to get the Bluetooth features to function reliably, I am not recommending this device at this time. As an alternative, take a look at the VaporFi VOX II or the V2 Pro Series 7.

View the SMOK BEC Pro. It costs $89.99 and ships via First Class Mail for free. 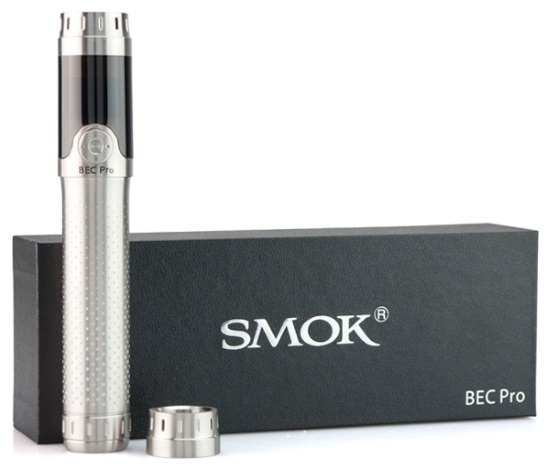 About the SMOK BEC Pro

The BEC Pro is similar to the ProVari in appearance. Like the ProVari, the device uses a single button for control of basic features including enabling and disabling Bluetooth and raising and lowering voltage and wattage. However, that’s where the similarities end. You can operate the BEC Pro as a mechanical mod and disable variable voltage and wattage entirely, or you can select from a massive power range topping out at 12 volts or 50 watts. Although I don’t have any interest in testing this functionality, SMOK claims that the BEC Pro is appropriate for sub-ohm vaping.

Although these functions would warrant a second look at the BEC Pro on their own, these features represent only a fraction of the device’s potential which you can unlock by pairing it with an iOS or Android device. 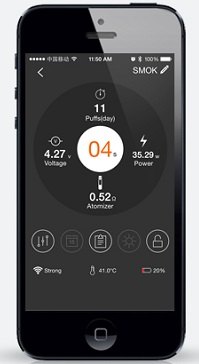 Upon connecting the BEC Pro to your mobile device, you’ll see a screen that tracks your e-cigarette usage in real time. This screen displays the duration of your last puff in seconds along with the current voltage and wattage of the BEC Pro, the resistance of the connected atomizer or cartomizer and your total number of puffs for the day.

At the bottom of the screen, you’ll find five buttons. On my device, only the first, third and fifth work; these allow you to adjust the settings of the BEC Pro and see a complete record of every puff recorded by the device.  According to SMOK, the second and fourth buttons are intended to allow you to schedule your vaping sessions and change the color of the device’s LED. For me, though, those buttons are grayed out and do not function. I’m not sure if these are intended for a future version of the BEC Pro firmware or for a different device entirely.

The BEC Pro app makes controlling the device a breeze; instead of pressing a single button dozens of times to adjust the power level of the BEC Pro, the app allows you to do so by simply dragging sliders. For me, though, the real attraction of the BEC Pro is its ability to track the number of puffs taken each day. Once you’ve gathered a large enough data set, you can display a graph tracking your usage and showing your progress toward any nicotine reduction goal you might have.

Speaking about the BEC Pro purely as an e-smoking device, I find it brilliant. The device has a heavy stainless steel construction and supports both 510/306 and eGo attachments. It also comes with two twist-on collars that keep the attachment steady and maintain the nice appearance of the device regardless of the type of attachment used. It supports 18650 batteries — my BEC Pro review sample didn’t include a battery or charger, though — and I have found that even with somewhat older batteries, I only need to swap the battery once per day. The BEC Pro is constructed from heavy stainless steel and should be able to tolerate a bit of rough handling.

Before starting this BEC Pro review, I had only used one device to date that produced exactly the same amount of vapor from the beginning to the end of the battery’s life: the ProVari. The BEC Pro is officially the second e-cigarette I’ve reviewed with that same capability, which is something that I find truly remarkable for such a low-cost device. At the time of writing, the BEC Pro costs just $89.99 while the ProVari costs $159.99. Although it has to be said that the ProVari is made in the United States and the BEC Pro isn’t, the $70 price difference is a powerful incentive toward choosing the BEC Pro when you consider that the two devices offer equal performance from my point of view and the BEC Pro has a much larger advertised power range.

Although I am unable to discern a difference in performance between the BEC Pro and the ProVari, there are a couple of slight differences in build quality. In favor of the BEC Pro is the fact that it has a floating magnetic center pin to maintain solid contact with whatever attachment you might like to use. No need to “pull the pin” here. On the other hand, I dislike the BEC Pro’s activation button and its tendency to rattle around when the device is moved. The threading of the BEC Pro also tends to squeak and scrape when the device is assembled and disassembled. Although you might be able to resolve this on your own with a bit of lubricant, it really should come this way from the factory.

The only truly negative aspect of the BEC Pro is the fact that, while I was reviewing it, I found it impossible to keep the Bluetooth connected consistently. I paired the BEC Pro with a fifth-generation iPod Touch running iOS 7 and found that it constantly lost its connection after a few minutes of not using it. I contacted SMOK about this and was informed that the BEC Pro is designed to disable Bluetooth after ten minutes of inactivity. Although this presumably conserves battery life, it makes the BEC Pro a difficult device to use if you want to track your e-cigarette usage precisely. If you pick up the BEC Pro and forget to reconnect it with the app, the device won’t save your data. It would be nice if the BEC Pro had a little bit of flash memory and could continue tracking your usage when the connection with the app was lost. Perhaps that’s something SMOK will add to a future version of the device.

View the SMOK BEC Pro. It costs $89.99 and ships via First Class Mail for free.