The e-cigarette industry has done quite a bit of maturing in the past year, as it has every year since its inception. Although the “Big Tobacco” e-cigarette brands such as Vuze and MarkTen continue to market “cig-a-like” e-cigarettes in an increasing number of stores, I actually reviewed less cig-a-likes in 2015 than in any other year since launching Vapegrl.com. That’s because independent e-cigarette companies have largely focused their attention on releasing high-end mods, mechanical mods and sub-ohm tanks. The NJOY Recharge e-cigarette bucks that trend.

Until now, the only cig-a-like that I’ve been able to recommend strongly is the one produced by V2 Cigs. My article about the best e-cigarette for beginners explains my reasons in detail. What it comes down to, though, is that V2 Cigs has advanced the cig-a-like platform so far that every other cig-a-like on the market now looks hopelessly out of date in comparison. I doubted that any other company had the budget — let alone the desire — to keep pace with V2 Cigs. However, the NJOY Recharge e-cigarette proves that the cig-a-like platform still has plenty of fight left.

Browse the NJOY Recharge collection at the NJOY website. NJOY offers a 30-day satisfaction guarantee on all items as well as a one-year warranty on non-consumable items such as batteries and chargers. All orders ship for free within the United States; use the coupon code VAPE4LESS to save 30 percent on NJOY Recharge starter kits, accessories and Flavor Chambers. 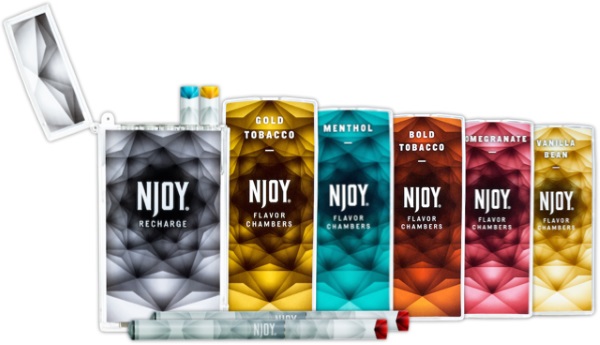 The NJOY Recharge is a small and very light e-cigarette — among the lightest I’ve ever seen with a rechargeable battery. It’s light enough to hold in the mouth, although unlike the extremely light NJOY King, you may need to bite down on it a bit for support.

The tiny size isn’t the only design cue taken from the King disposable for the NJOY Recharge; the Recharge also ships in the same style of flip-top Zippo-styled case that made the King famous. The wide and thin NJOY Recharge case is smooth and slides easily into a pocket. It is also large enough to hold a USB charger, two fully assembled NJOY Recharge e-cigarettes and three refill cartridges — NJOY likes to call them “Flavor Chambers.” The case won’t charge your dead batteries for you, but the benefit is that you get plenty of storage capacity with an extremely small size.

The functionality of the NJOY Recharge carrying case isn’t its only benefit. If you’ve ever played absentmindedly with the lid of a flip-top lighter before, you know exactly what I’m talking about. The NJOY Recharge case opens and closes with an extremely satisfying “click” — an auditory cue that satisfaction is soon to come. It’s a great addition to the overall experience of using this e-cigarette.

Most cig-a-likes use twist-on cartridges with standard thread sizes. The thread types can be identified with universal terms such as “KR-808” and “510,” which lets you know which third-party cartridges are compatible with the batteries that you already own in case you decide that you’d like to experiment with different flavors.

The NJOY Recharge uses a proprietary press-on cartridge with no threading. This means that there are no third-party cartridges compatible with the NJOY Recharge. You’ll need to stick with NJOY’s refill cartridges unless you decide to purchase a different e-cigarette.

Although I would normally have difficulty recommending a proprietary e-cigarette, NJOY has a trick up its sleeve that makes the NJOY Recharge much easier to recommend: NJOY blends its e-liquids in the United States, and the flavors are great. 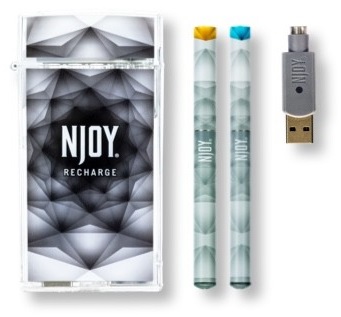 There’s also the extremely reasonable price point of the NJOY Recharge Flavor Chambers. If you buy a pack of 50 to get the bulk rate and apply my NJOY coupon code VAPE4LESS for an additional 30 percent discount, the final price is just $76.99, or $1.54 for each cartridge. The price is still attractive if you’re unable to buy in bulk, though — NJOY doesn’t charge shipping fess for orders delivered within the United States, with no minimum total needed to qualify.

As for the NJOY Recharge kits themselves, they start at $13.99 with the coupon code and ship for free. The lowest priced kit includes the carrying case along with two batteries, two refill cartridges and a USB charger. With the coupon, the fuller-featured kits cost $20.99, $45.49, $76.99 and $87.49, with each containing an increasing number of accessories and refill cartridges.

One of the interesting things about the NJOY Recharge is that the nicotine content of the cartridges varies by flavor. Many e-cigarette companies will offer a single Tobacco flavor, for example, in a range of nicotine strengths such as 0, 6, 16 and 24 mg. With NJOY, every flavor is available in just one nicotine strength.

That isn’t the only trick NJOY has up its sleeve, though. If you select the strongest flavor — Bold Tobacco — you’re getting a massive nicotine strength of 45 mg. That’s one of the highest nicotine strengths available from any company in the e-cigarette industry. Moving down the list, the Menthol flavor has a nicotine strength of 30 mg, Gold Tobacco is 24 mg, and the Vanilla and Pomegranate flavors both contain 18 mg.

Many people find the small cig-a-like form factor very appealing in an e-cigarette — especially if they still smoke and want to switch to something that looks and feels familiar. The problem with cig-a-likes, though, is that they don’t generate a great deal of vapor per puff when compared to larger vaporizers. In fact, back in 2010, a firm studied the effect that the e-cigarettes of that time had on the concentration of nicotine in the blood. The study concluded that almost none of the nicotine contained within the e-cigarettes actually reached the bloodstream.

Why did e-cigarettes suffer from poor nicotine delivery compared to tobacco e-cigarettes? Part of the reason was the fact that the e-cigarettes of that time used disposable plastic cartridges to store e-liquid. Today, almost no company still uses this type of cartridge. However, the other reason was the lower vapor production that the smallest e-cigarettes still suffer from today. That’s why the NJOY Recharge is available in such high nicotine strengths; with up to 45 mg of nicotine per ml of liquid, you’re certain to be able to achieve satisfaction with this small e-cigarette regardless of how heavily you currently smoke.

The poorer vapor production of smaller e-cigarettes aside, the NJOY Recharge actually boasts vapor production well above average for an e-cigarette that’s so close in size to a real cigarette. It’s a bit larger than the disposable NJOY King, but it is also quite a lot smaller than the V2 Cigs EX e-cigarette. In preparation for this review, I had absolutely no problem using the NJOY Recharge full-time even though I am accustomed to using larger sub-ohm vaping setups.

NJOY’s e-liquids are excellent across the board. I recently gave a glowing review to the new NJOY Artist Collection, and the lower-cost cartridges used for the NJOY Recharge are no slouches, either. The vanilla flavor is rich and decadent, the pomegranate is fruity and tangy, and I love both of the tobacco flavors as well. They’re slightly different from one another, with the Gold exhibiting a bit more sweetness while the Bold delivers a peppery punch.

The NJOY Recharge is a great e-cigarette for beginners at a remarkably low price. Using my NJOY coupon code VAPE4LESS, the least expensive NJOY Recharge starter kit costs just $13.99 — and you won’t even pay shipping. What’s even more remarkable is the fact that this product is from NJOY, perhaps the oldest major e-cigarette company in the United States — not some no-name brand that you found in a convenience store. Even the most expensive NJOY Recharge kit costs just $84.49 with the coupon — and that includes a whopping four batteries and 34 refill cartridges.

More important than the price, though, is the actual experience of using the NJOY Recharge. This is an e-cigarette that delivers a far greater level of satisfaction than its tiny size would suggest — enough that you may never even feel the desire to upgrade to something larger. If you are new to e-cigarettes and looking for your first starter kit, I recommend the NJOY Recharge without hesitation.

Browse the NJOY Recharge collection at the NJOY website. NJOY offers a 30-day satisfaction guarantee on all items as well as a one-year warranty on non-consumable items such as batteries and chargers. All orders ship for free within the United States; use the coupon code VAPE4LESS to save 30 percent on NJOY Recharge starter kits, accessories and Flavor Chambers.