As I look at the current state of the e-cigarette industry, I think it’s fair to say that the smallest e-cigarette models aren’t as popular as they once were. V2 Cigs, for one example, has done an excellent job of evolving the “cigalike” platform with the release of their EX Series, coming out with a tiny e-cigarette that looks great and generates plenty of vapor. NJOY, on the other hand, has easily the best disposable e-cigarette on the market with the NJOY Daily.

If you go to your local convenience store, though, you’re far more likely to see something along the lines of the Vuse than you are to see anything from a non-tobacco company — and in my experience, Vuse cartridges don’t taste very good and don’t last very long. The NJOY Daily tastes great, but using disposable e-cigarettes can be expensive. So, you can understand why some people might try the e-cigarettes available in their local convenience stores once or twice and then go back to smoking.

The question that NJOY has attempted to answer with the Convenience Vaping System is this: Why do some people try e-cigarettes, only to return to smoking later or become dual users? The Convenience Vaping System addresses the desires of the mainstream e-smoker — a person who doesn’t want to carry a box mod, fill tanks or tinker with coils but still demands superior flavor and satisfaction.

View the Convenience Vaping System at the NJOY website. Packages start at $9.99 for a bundle that includes one battery with USB cable, one pre-filled tank and one refillable tank. All orders from NJOY ship free in the United States.

About the NJOY Convenience Vaping System 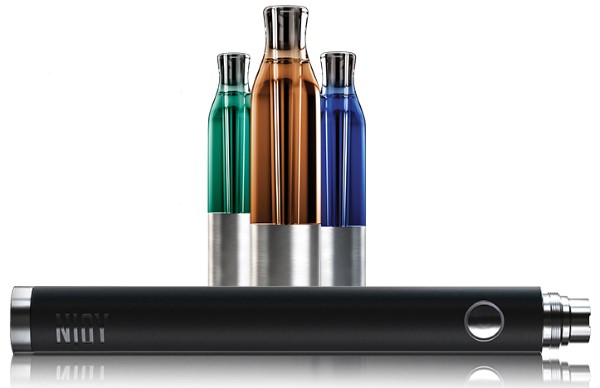 The NJOY Convenience Vaping System puts a unique spin on the replaceable cartridge e-cigarettes of the past. For starters, it uses the eGo battery as its base. The eGo has been one of the most popular e-cigarette platforms for more than five years now, and with good reason; the eGo has great vapor production and long battery life in relation to its size. The eGo battery is also thread-compatible with a wide variety of attachments. The Convenience Vaping System, though, is the first e-cigarette system to my knowledge that bundles an eGo battery with large pre-filled tanks.

The tank is really the element that gives the Convenience Vaping System its uniqueness. The tank’s design has a great deal of visual appeal. The tapered center air tube is the only visible portion, while all of the electrical components are hidden under a collar at the base. The tank holds 3 ml of e-liquid. Five flavors are available, each with a nicotine strength of 15 mg.

Of course, having a low cost of entry is a great way to stimulate interest in a new e-cigarette product. To encourage people to give the Convenience Vaping System a try, NJOY offers a $9.99 trial bundle that includes a smaller 650 mAh battery along with one pre-filled tank and one refillable tank.

With about 45 total mg of nicotine in each Convenience Vaping System tank, the theory is that that one tank should be the equivalent of about three packs of cigarettes. The reality, though, is that you probably won’t get three days of vaping time out of each tank if you’re using the NJOY Convenience Vaping System exclusively. That being said, I go through a lot of e-liquid with my standard vaping setup and didn’t drain any of the five tanks that NJOY sent me in a single day. At a nicotine strength of 15 mg, 3 ml of e-liquid is quite a lot. 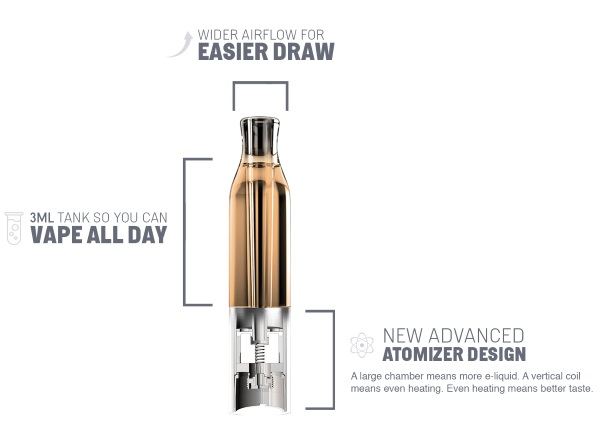 NJOY’s Classic Tobacco, Blue + Black Berry and Peach Tea flavors are all really good, in my opinion. I happily drained them all, and with these three flavors you’ve got a pretty varied assortment from which to choose. The Menthol and Vanilla Bean flavors didn’t really do it for me, but I’m very picky about menthols and have never really liked vanilla e-liquids.

Pairing the 3 ml tank with a 1,000 mAh battery was an excellent decision on NJOY’s part, as well. Using a higher-capacity battery means that if you begin with a full tank and fully charged battery, you’ll empty the tank before the battery dies. A built-in USB port gives the battery pass-through functionality as well, so you can vape while charging. The battery also lacks the raised fire button of some eGo batteries, which should make accidental presses difficult — although you can manually lock the battery as well.

NJOY has a real winner with the Convenience Vaping System. The pre-filled tanks make it as problem-free and easy to use as a cigalike. Though it’s certainly larger than a cigalike, a full tank and fully charged battery will definitely last all day — which really isn’t true of most cigalikes.

What’s even more impressive is that NJOY’s e-liquids actually do taste good and are completely satisfying, unlike anything else you’re likely to find in a convenience store. In preparation for this review, I switched the Convenience Vaping system full-time instead of the box mod and sub-ohm tank that I usually use. I didn’t miss my regular vaping setup at all. Not only is the Convenience Vaping System a great introduction to e-cigarettes, but I could easily see it being the only vaping system that many e-smokers will ever need.

View the Convenience Vaping System at the NJOY website. Packages start at $9.99 for a bundle that includes one battery with USB cable, one pre-filled tank and one refillable tank. All orders from NJOY ship free in the United States.