Truly innovative products are often rare in a mature industry. When a formula proves successful, the marketplace becomes flooded with a glut of “me too” products attempting to capitalize on the success of the original innovator. Since the majority of the world’s electronic cigarettes are produced by a handful of manufacturers in China, the e-cigarette industry reached this stage rather rapidly — and recently, I’ve reviewed a lot of rather dull e-cigarettes that I’ve struggled to differentiate from the many e-cigarettes I’ve reviewed before.  I need something new. I need something groundbreaking. The Clearette e-cigarette isn’t it. I’ll explain why in this review. As an alternative, I suggest taking a look at my article about the best e-cigarettes of 2016 or the best e-cigarette for beginners. 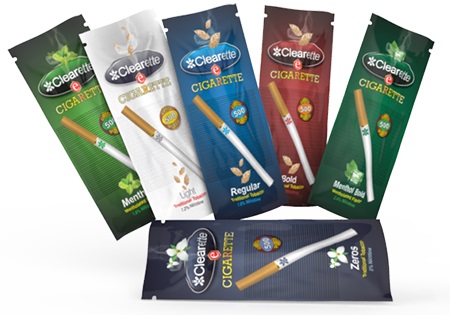 The basic Clearette e-cigarette kit is about as spartan as they come, costing $14.99 and including nothing more than a battery, a USB charger and two cartridges. Clearette also sells a line of flavored disposable e-cigarettes, which they call “e-hookahs” in adherence to a trend that’s been popular over the past several months. The flavor selection is equally sparse — although Clearette’s disposable e-cigarettes come in a variety of flavors, cartridges for the standard Clearette e-cigarette are available in Tobacco and Menthol only with nicotine strengths of 18 and 24 mg. Clearette’s liquids are most likely Chinese in origin.

Clearette’s price of $14.99 for a basic e-cigarette kit is about as low as you’ll find anywhere, and the price of $14.95 for five refill cartridges is slightly higher than average. However, this tends to even out because Clearette doesn’t charge shipping fees for any of its products. If you see yourself buying just a pack or two of cartridges at a time rather than taking advantage of the bulk offers available from companies such as V2 Cigs, the amount of money that you save by not paying shipping can quickly add up. On the downside, Clearette seems to lack a clear warranty and return policy except in the case of damaged, missing and unopened items. They do have a phone number and email address for customer service inquiries, however.

One of the problems associates with smaller e-cigarettes is that new e-smokers often pick the “light” nicotine strength because they’re former smokers of light cigarettes. The nicotine absorption derived from e-cigarettes is different from that of tobacco cigarettes, though, which can lead to disappointment. Clearette avoids this possible issue by offering its cartridges in just two strengths: high and higher. The 24 mg cartridges I tried packed a real punch and more than made up for their diminutive size. While the flavor wasn’t exactly memorable, the experience was entirely satisfying.

In the long run, I can see people quickly moving on from Clearette to other brands when they begin to feel the desire to experiment. Companies such as V2 Cigs, who I mentioned above, along with Halo and Volcano don’t just offer a variety of fruity and spicy flavors to keep customers interested — they also sell multiple variations of their basic tobacco and menthol flavors. For example, you could buy a new flavor from Volcano every week, and you wouldn’t have to repeat flavors for nearly a year.

Clearette sells a high-quality e-cigarette at one of the most affordable prices you’ll find anywhere. As a way to try e-cigarettes for the first time, it’s far better to buy a Clearette kit than a disposable e-cigarette — you’ll be able to keep the battery and simply buy refill cartridges rather than buying disposable e-cigarettes time and again. For that reason, I can give Clearette a recommendation if you’ve never used e-cigarettes before. The only real problem with Clearette is that it doesn’t give you room to grow. If you want to try some new flavors once you become more experienced — or perhaps upgrade to a larger e-cigarette with superior battery life — you’ll have to look elsewhere.