When I reviewed the Choice 7’s e-cigarette not long ago, the response was surprising; with the Choice 7’s company being a relatively new and small one, I didn’t imagine that the review would be seen by many people. Apparently, this e-cigarette was getting more attention than I realized, so I decided to take a look at their larger kit. This Choice 7’s Hybrid Kit review details the results of my findings.

Thanks for stopping by! This is a fairly outdated product now. Why not take a look at my list of the best e-cigarettes of 2016 instead? 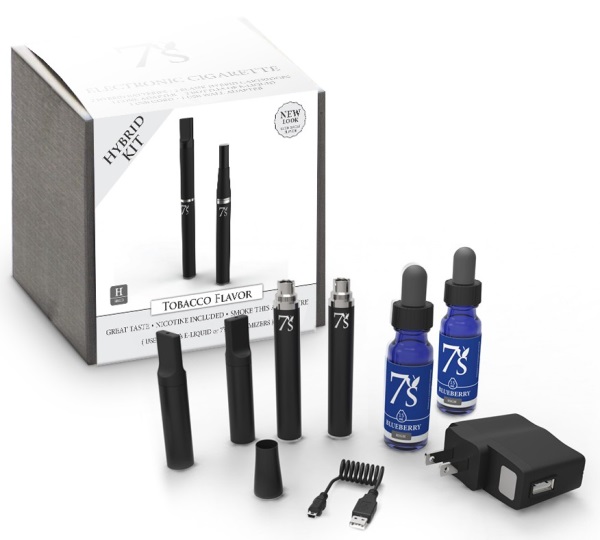 About the Choice 7’s Hybrid Kit

In the past, you may have read the praise I’ve lavished upon eGo e-cigarettes. I’ve reviewed no shortage of eGo kits, and I always come to the same conclusions; the eGo is inexpensive, long-lasting, easy to fill and produces enough vapor to satisfy long-term smokers while remaining small enough for people who don’t want to carry something that looks like a flashlight. In short, it’s the best possible combination of everything — and because most e-cigarette vendors carry eGo-compatible accessories, you’re free to change anything you don’t like about your eGo e-cigarette. Choice 7’s have taken these features to heart when designing the Hybrid Kit, which includes both a pair of refillable atomizer/cartridges and a cone in case you’d like to use your own atomizer or cartomizer.

In all, the Choice 7’s Hybrid Kit includes two 650 mAh batteries with built-in USB ports, two empty hybrid atomizer/cartridges, one cone for third-party atomizers or cartomizers, two bottles of e-liquid and charging accessories. The kit sells for $99.95, which is quite a bit more than some other e-cigarettes such as the entry-level kits available from VaporFi. However, it must be said that less expensive eGo kits compromise in ways the Choice 7’s Hybrid Kit doesn’t, by including less e-liquid, cutting the number or capacity of the batteries or omitting the USB pass-through feature. Unlike most of the inexpensive eGo-based kits on the market today, you can operate the Choice 7’s Hybrid e-cigarette directly from your computer’s USB port even when the battery is dead.

Upon receiving the Choice 7’s Hybrid Kit, the first thing you’ll notice is the lavish attention placed upon the packaging. This is clearly a product ready to be sold in high-end stores, if Choice 7’s are able to secure such a deal. That’s a refreshing feature; although many e-cigarette companies such as V2 Cigs have recently transitioned to nicer packaging, many e-cigarette companies are still selling their products in plain card stock boxes and blister packs. Companies such as Choice 7’s are beginning to realize that differentiation and going the extra mile are the keys to surviving in an increasingly crowded industry.

Getting started with the Choice 7’s Hybrid Kit is simple; simply remove the cap from one of the hybrid cartridges, add several drops of e-liquid to the diffuser, screw the cartridge into the threading at the top of the battery and you’re off and running. The Choice 7’s Hybrid battery has a single fire button that you push to create vapor, and the fire button blinks red several times when the battery is dead. Even heavier vapers should have little trouble going all day on the two batteries.

The Choice 7’s e-liquid selection costs $15.99 per bottle and caters to people who want to try mixing base flavors to come up with new and interesting combinations. Four different types of tobacco flavors are available as well as a menthol and two types of mint. In addition, you can choose from a variety of sweeter flavors including grape, mango and orange. It’s a large selection that should have something for just about everyone, but here one of the primary benefits of the eGo-based e-cigarette come to light: since you aren’t stuck with buying pre-filled cartridges for your e-cigarette, you can shop around for e-liquids. If you’re new to e-smoking, you might want to take a look at my article about the best e-liquid companies for a few ideas.