So, what happened in the vaping industry in 2015? A lot. Not so much. On the product side, we’ve seen box mods and sub-ohm tanks jump in popularity in a huge way. The popularity of tube mods and cigalikes seems to have taken a hit as a result. Why bother with a tube mod when a box mod typically provides double the battery life? At the same time, cigalikes seem more difficult than ever to sell. With the exception of major players such as V2 Cigs, online sellers of cigalikes appear to have seen their conversions rates dip in the past year. If you’re currently a smoker and you’re seeing brands like Vuse every day at the same location where you buy your cigarettes, I suppose it makes sense that you’d give that brand strong consideration when you switch to e-cigarettes.

On the regulatory front, the wheel continues to churn toward eventual regulation of e-cigarettes by the FDA in the United States. In October 2015, the FDA sent its proposed regulations to the White House Office of Management and Budget for review. It’s the OMB’s job to determine whether the cost of the proposed regulations is justifiable given the potential for protecting the health of the public. In other words, we’re still a long way from the final regulations that some believe will shut down 99 percent of the American e-cigarette industry.

On the opposite end of the spectrum, smokers in the United Kingdom will soon be able to receive prescriptions for e-cigarettes through the National Health Service. Public Health England estimates that as many as 76,000 lives could be saved every year if all British smokers switched to e-cigarettes. I am in constant amazement over the way in which the same product can be regarded in completely opposing ways by different people, depending upon their interests and motivations.

If I know one thing, it’s that the best e-cigarettes of 2016 offer more than they ever have before. Whether you’re looking for longer battery life, better looks, or more vapor production, you can get it now for less money than in previous years — and that’s the hallmark of any great tech industry.

Best E-Cigarette of 2016: The Beginner

Coupons: vapegrl15 (15% off orders including a starter kit), vapegrl (10% off all other orders) — all coupons exclude V2 Pro

I have always recommended V2 Cigs as the best e-cigarette for beginners. This year is no exception. Although the statistics suggest that new e-smokers are choosing the Vuse brand for the most part — and the Vuse brand isn’t bad — that’s mostly the result of having great marketing and a wide distribution network. No cigalike offers anything like the performance or the great looks of the awesome V2 Cigs EX series. V2’s customer service remains the best in the industry, too, with a lifetime warranty on non-consumable components and downloadable quality control reports for every cartridge and bottle of e-liquid.

Best E-Cigarette of 2016: The Upgrader 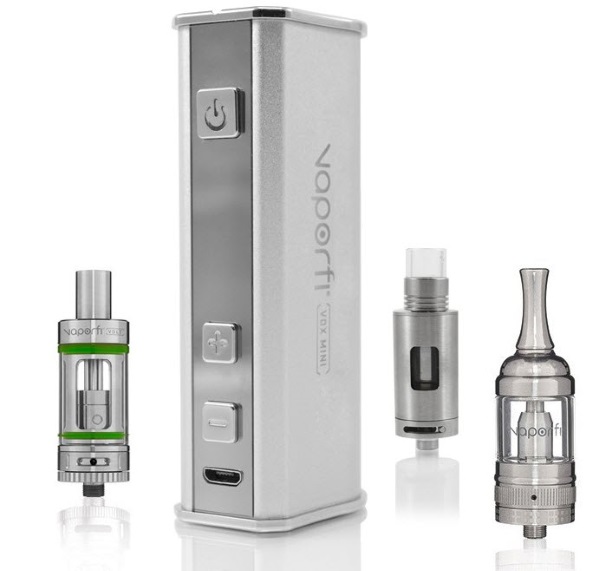 The VaporFi VOX Mini is an incredibly tiny box mod that’s scarcely larger than the eGo e-cigarettes of yesteryear, while still being sub-ohm capable and including your choice of three different easy-fill tanks. I particularly love the Volt Hybrid Tank, which is a re-branded Kanger Subtank Mini with a few upgrades and a vertical organic cotton coil. The VOX Mini has an internal 2,500 mAh 35 amp battery that charges via a USB port, supports coils as low as 0.3 ohms and has a maximum power of 40 watts, easily adjustable via the plus and minus buttons. The VOX Mini is a highly pocketable device with power to spare.

Best E-Cigarette of 2016: The Hobbyist 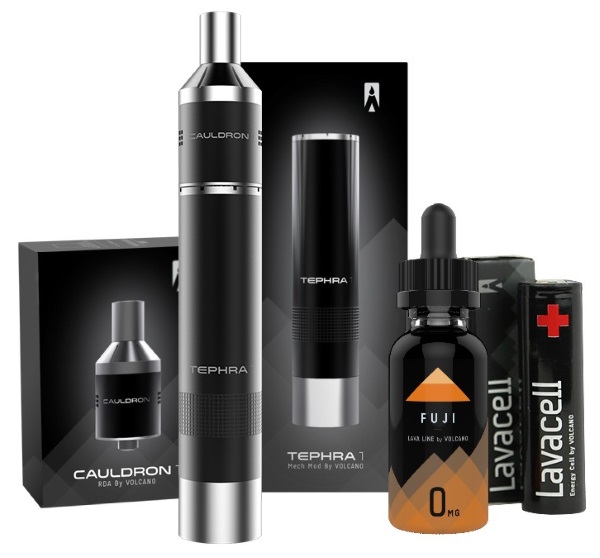 Whether you’re a cloud chaser or simply an e-cigarette hobbyist, nothing could be more satisfying than a new coil build that accomplishes exactly what you were hoping for. If you build your own coils, it’s highly likely that you prefer mechanical mods. In my estimation, there’s no better mechanical mod from a price-performance standpoint than the Volcano Tephra. The Tephra line starts at just $84.99 for a package that includes the mod, a battery, a rebuildable atomizer and a full-sized bottle of e-liquid. If you’re a cloud chaser, you’ll want to upgrade to the Tephra 2, which uses a larger and even safer 40 amp, 4,000 mAh 26650 battery. I really like the aesthetics of the Tephra series; a system of colored aluminum sleeves allows you to select your choice of nine different colors for both the mod and RDA. The Tephra features a stainless steel body with copper contacts and a recessed magnetic fire button for safety and great feel. If you have the budget for something really special, check out the Pele as well — it’s a luxury mech mod that’s built in Hawaii.

Best E-Cigarette of 2016: The Ultimate 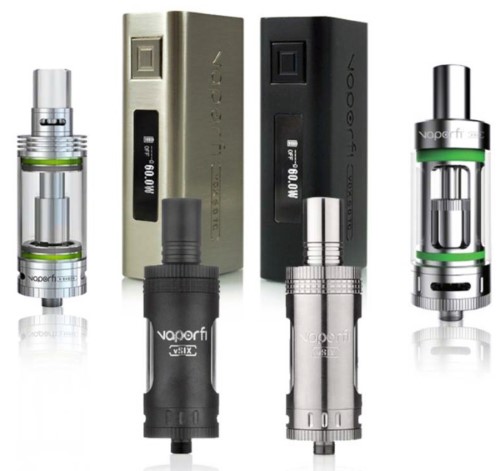 Not since the days of the original ProVari many years ago have I held an e-cigarette that feels as solid and luxurious as the new VaporFi VOX 60 TC, released in 2016. Constructed from a zinc alloy, the VOX 60 TC looks and feels like a work of art. The VOX 60 TC allows you to choose between two finish options: smooth brushed metal or rubberized black for improved grip. It boasts a dual battery system for a total capacity of 2,600 mAh, supports temperature control coils and has a maximum output of 60 watts. It supports extremely low-resistance coils, down to a limit of 0.1 ohms with standard kanthal coils or 0.05 ohms with titanium or nickel temperature control coils. In an industry full of generic copycats, the VaporFi VOX 60 TC is a device that’s truly worthy of admiration.

There’s a joke currently making the rounds through vaping forums. It goes something like this: How do you make a premium e-liquid? Start with a regular e-liquid and add a ton of sweetener. If your sweet tooth has had all that it can bear, give Black Note a try. Black Note makes nothing but tobacco e-liquids, using cold-extracted essences of real tobacco. Black Note also claims to have the world’s first lab-certified N.E.T. e-liquid. With eight different flavors in all, Black Note has something that’s certain to please any tobacco lover. Although the e-liquid isn’t cheap, Black Note does offer an unconditional guarantee. If you don’t like the e-liquid, you can send it back for a refund. Black Note will even pay the shipping charges.

The JUUL is a new e-cigarette that’s aimed at beginners and contains a completely new — and patented — type of e-liquid formulation. JUUL e-liquid contains a salt of nicotine rather than the freebase nicotine usually used in e-liquids. JUUL’s developer — PAX Labs — has studies showing that JUUL’s e-liquid can create a blood-nicotine concentration much closer to that of a tobacco cigarette than what you’d be able to achieve with typical e-cigarettes.

JUUL’s design is extremely user-friendly, with a proprietary drop-in cartridge system that works reliably and allows you to see the remaining e-liquid level easily. JUUL’s cartridges aren’t cheap, with four-packs selling for $15.99. However, the idea is that with the nicotine salts producing a higher level of satisfaction, you’ll be going through e-liquid less quickly than you would with regular e-cigarettes. Also, you can save an extra 15 percent off the normal price by having your refill cartridges shipped automatically each month. There is nothing else out there quite like JUUL, and it definitely merits your consideration if you’re new to e-cigarettes — especially if you’re a heavier smoker.

Clapton coils are extremely popular among the build-it-yourself crowd right now. Essentially, a Clapton coil is made by coiling a wire that’s already twisted. This creates a coil with a ton of surface area for the resistance, so you end up with a high volume of vapor that’s very rich in flavor. Until now, though, Clapton coil builds have primarily been available only to those who build their own coils. If you have safety concerns about that or simply prefer the convenience of pre-built coils and don’t want to go through the trouble, you would have been out of luck.

So, Atom Vapes had the genius idea of manufacturing pre-built Clapton coils for the most popular tanks currently on the market. The coils come four to a pack, which means that they cost a little more per unit than stock coils. However, Atom Vapes claims that they last up to 33 percent longer than stock coils. In my experience, that depends a bit on the gunk factor of your e-liquid. Atom Vapes gClapton coils are gold-plated and look unbelievably cool. They’re compatible with Kanger, Arctic, Horizon and Herakles tanks. Ni200 coils are also available for most tanks. I can vouch for the fact that these coils will provide a significant upgrade to your tank’s vapor production and flavor quality. 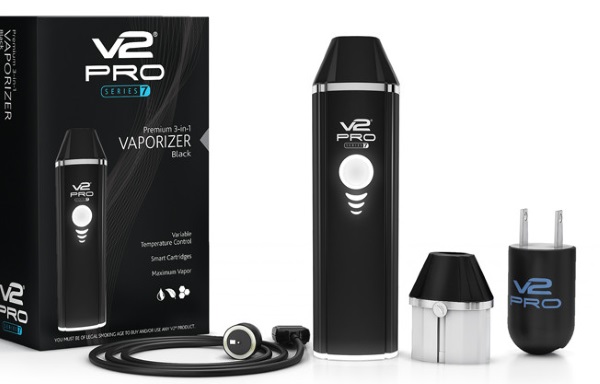 The V2 Pro series is an attempt by V2 Cigs — long the best manufacturer of cigalikes — to enter the high-end vaporizer market. V2 Pro aims to be the best vaporizer for anyone’s needs, whether you want to vaporize e-liquid, loose leaf tobacco or wax concentrates. The V2 Pro Series 7 is the higher-end of the two vaporizers, featuring larger cartridges, longer battery life and three-stage temperature control. It looks nothing like any e-cigarette you’ve ever seen and more closely resembles the battery-powered devices currently available for vaping, well, other substances. The V2 Pro Series 7 is a great choice if you need a multi-purpose vaporizer with a variety of uses. It’s also a good way to guard against regulatory changes for someone who isn’t fully committed to e-cigarettes. If FDA regulation forces your favorite e-liquid off of the market or taxation removes all of the cost savings, no problem — you can vaporize loose leaf tobacco instead and still enjoy a combustion-free smoking experience.