Mechanical mods — e-cigarettes with no controls except a fire button and no regulation or protective circuitry — have been around for almost as long as I’ve used e-cigarettes. Although they’ve always been popular with a certain subset of the vaping community, I have never fully understood why. You would hear people say that mechanical mods “hit harder” than standard e-cigarettes, but I didn’t know how that could possibly be. How could a mechanical mod — which operates only at 3.7 volts unless you stack batteries, which is a serious no-no — possibly hit harder than a device like the VaporFi VOX II, which operates at up to 8.5 volts? That would be impossible, of course, so mechanical mods didn’t become popular with mainstream e-smokers for several years.

Recently, though, that began to change. With the invention of rebuildable atomizers, it became possible to build a heating coil with a resistance as low as you’d like. Sub-ohm vaping — using an atomizer with a resistance of under 1.0 ohms — allows for massive vapor production at any voltage, as long as the amperage demands don’t exceed the capabilities of the battery being used. If you can change your atomizer rather than changing the voltage or wattage of your device, why buy an expensive device at all? In this scenario, all that you really need is a battery and a switch.

View the Tephra line at the Volcano website or shop in Europe. Devices start at $49.99 and full kits start at $84.99. The Tephra mod has a 90 day warranty and ships within one business day. 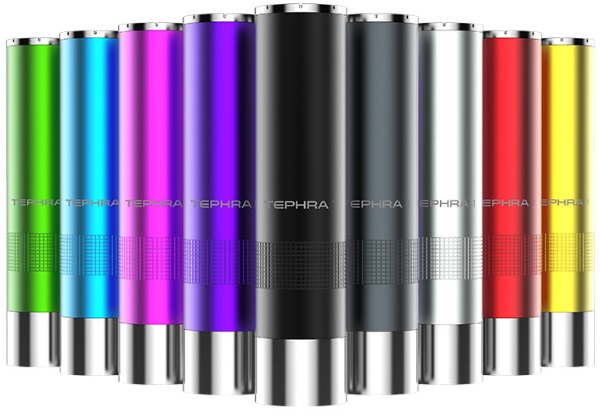 About the Volcano Tephra Mod

The Tephra Mod was one of the first new devices that Volcano released in 2015 as part of a complete retooling of the company. Back in 2010, Volcano was the company I selected when purchasing my very first e-cigarette — that’s how long they’ve been around. Over the years, though, it became evident that the company wasn’t really evolving to keep up with the changing needs of the vaping community. Although Volcano’s e-liquid has always been top notch, their devices were limited in capability and priced quite high compared to the competition.

So, in 2015 Volcano reinvented itself as a supplier of high-performance vaping devices for enthusiasts. Volcano now sells numerous mechanical and power-regulated mods. The company has also become a full-service shop for atomizer building supplies such as wires and wicks. This is undoubtedly a good decision for Volcano, and I think it’s really going to please experienced e-cigarette users as well.

The Tephra 1 is the base model in Volcano’s lineup of mechanical mods, along with the larger Tephra 2 and the Hawaii-built Pele. Both Tephra models feature fully adjustable top and bottom copper connections, recessed fire buttons and interchangeable aluminum sleeves in nine different colors. In addition, both Tephra mods are designed to match up perfectly with the Cauldron rebuildable atomizer, which is available with sleeves in all of the same colors. Regardless of the color(s) you select, the Tephra is a really sharp looking device and looks far nicer than any of the mechanical mods I’ve used in the past.

None of these features would matter much, though, if the Tephra was used in conjunction with a typical e-cigarette battery with a maximum power delivery of about 11 amps. Both Tephra models are intended for use with corresponding Lavacell batteries, which deliver up to 35 amps of power and have either 2800 or 4200 mAh of life, depending on the size. This should mean that the Tephra can safely handle a coil with a resistance as low as 0.2 ohms, although Volcano obviously advises that your safety is your own responsibility.

As part of Volcano’s campaign to retool its brand, the company sent Tephra 1 mods and Cauldron rebuildable atomizers to a variety of e-cigarette review websites such as mine. I needed to purchase my own coil building supplies such as an ohm tester, wire, wicking material and so on. Upon receiving the Tephra mod, my first impression — as I mentioned above — was that it looks really great. Volcano has always had some of the better looking devices on the market, but they’ve really outdone themselves here. I was accustomed to seeing some really cheap looking, ugly mechanical mods crudely fashioned out of aluminum tubes. The Tephra is sleek, light and highly pocketable. For comparison’s sake, it weighs just 135 grams with a battery and without an atomizer, while the VaporFi VOX II weighs 163 grams. The VOX II is also nearly twice as large.

Assembling the Tephra mod, I appreciated the fact that all connections are fully adjustable. At first, I had a bit of a problem with the outer sleeve rattling when the battery was installed. This was quickly resolved by loosening the top connection. More importantly, this means that you’ll have no problem using the Tephra with the tank or atomizer of your choice, even if it has an unusually long or short thread length. All of the threads on the Tephra mod are wonderfully machined and move very smoothly, while the fire button feels solid enough that accidental presses should be difficult. The battery and atomizer contacts are made from thick, solid copper. 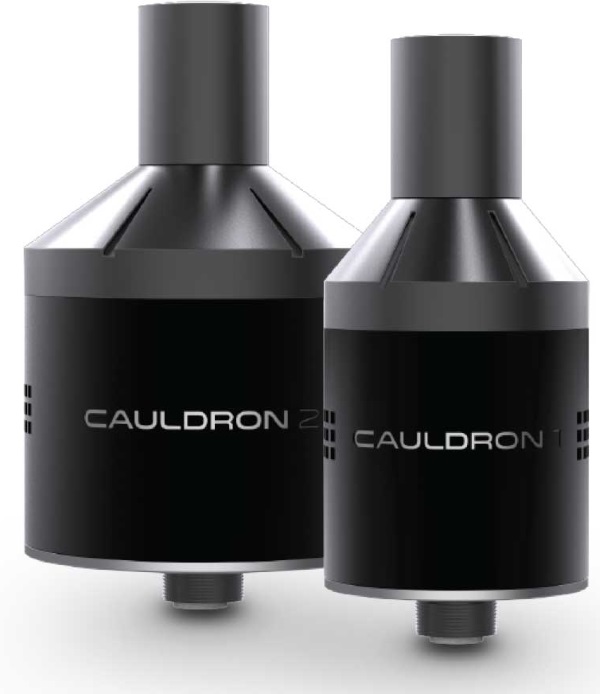 The full Tephra mod kit includes Volcano’s Cauldron rebuildable atomizer. This is a three post atomizer — one positive and two negative — with a very deep drip well, fully adjustable airflow and stainless steel and copper construction. It is quite easy to work with, and nearly all of my coil builds have been successful even though I was completely new to coil building when I set out to write this Tephra mod review. In fact, using the Cauldron rebuildable atomizer, I have achieved vapor production superior to that of any vaping setup I’ve ever used.

In general, I would say that mechanical mods work best in the hands of experienced e-cigarette users. If you use a tank system that only operates at one resistance level, a mechanical mod won’t allow you to change the power output of your e-cigarette to suit your e-liquid or your current desires. This can sometimes create situations in which you’re unable to get enough vapor out of your e-cigarette — or you might deal with harsh “dry hits” because your tank works best at a lower voltage level. This is why I prefer a power-regulated mod such as the VaporFi VOX II for daily use. In addition, power-regulated mods are loaded with safety features that prevent them from being used in over-current conditions, with short circuits and in other situations that could cause injury.

However, for e-smokers who don’t believe that they need these safety features, there’s a lot to be said for mechanical mods. With no moving parts except a magnetic fire button — which is easily replaced — practically nothing about a mechanical mod has any chance of failure. A power-regulated mod, on the other hand, often has several points of failure including electronic controls, a circuit board and an LED display. Drop a power-regulated mod on a hard surface enough times and it’ll probably be toast. A mechanical mod probably won’t be. There’s also the matter of price — the VOX II, for example, costs three times as much as the Tephra 1, although the base package for the Tephra doesn’t include the battery and the VOX II does.

Overall, the Tephra mod represents a big step forward for Volcano. If you’re looking for a mechanical mod with a solid design and slick looks, the Tephra is a great choice. The price is right and the device works exactly as advertised. I have also had a great experience with the Cauldron rebuildable atomizer. Even without previous experience building my own coils, I achieved some of the best vapor production I had ever seen right off the bat. If you’re an experienced e-cigarette user, what more could you ask for?

View the Tephra line at the Volcano website or shop in Europe. Devices start at $49.99 and full kits start at $84.99. The Tephra mod has a 90 day warranty and ships within one business day.