In 2015, Volcano launched a new version of its website featuring a complete revamp of its aging product line. Over time, I’ll be reviewing as many of Volcano’s new products as possible right here, so keep an eye out. To kick things off, Volcano has sent samples of its new Lava Line e-liquids to bloggers such as myself. Lava Line is a departure from the single-flavor e-liquids of Volcano’s past. It also features the new 50/50 VG/PG mix that Volcano has begun using across its entire e-liquid line, helping e-smokers generate larger clouds than ever on the mods and RBAs that have become so popular of late. 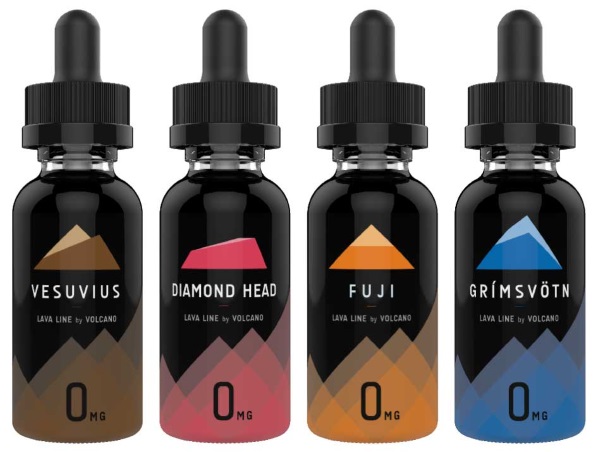 The Lava Line e-liquid series debuts with four flavors inspired by some of the world’s most famous volcanoes: Fuji, Diamond Head, Grímsvötn and Vesuvius. The e-liquids come individually packaged in very nice boxes with glass bottles and child-proof glass dropper tops. Each 30 ml bottle costs $22.99. and no quantity discounts are available at present.

Lava Line e-liquids are also available in a wider variety of nicotine strengths than Volcano’s classic e-liquid lineup: 0, 3, 6, 12 and 18 mg.

Volcano’s new US-made e-liquids were a hit. In fact, the spectacular Menthol Burst flavor remains my primary e-liquid of choice to this day. However, Volcano’s e-liquid line has been somewhat stagnant in the nearly five years that have followed, while the tastes of the experienced vaping community have changed. Many APV owners have switched to ultra low-resistance tanks and RBAs and have begun to prefer e-liquids with higher ratios of vegetable glycerin — capable of producing thicker vapor clouds — as a result. Many people have also grown tired of single-flavor e-liquids and have gravitated toward more interesting blends.

How you’ll feel about the price of Volcano’s Lava Line e-liquids might be a bit of a personal thing. From my point of view, the e-liquid market seems to have diverged a bit — especially over the past year. On one side are people such as the well-known e-liquid reviewer Dr. Vapenstein, who recently emerged from a lengthy hiatus and complained about the high price of many e-liquids. From his point of view, $20 should be enough to buy up to 120 ml of e-liquid. After all, sub-ohm atomizers and tanks have driven many e-smokers to drastically cut the nicotine strength of their e-liquids because each puff vaporizes more e-liquid than ever before. For some people, a 30 ml bottle is a one-day supply of e-liquid. If you share that point of view, a price of $22.99 for a 30 ml bottle of e-liquid is likely to seem overly steep.

On the other side of the coin, the vaping community is also able to support a company like Black Note, offering blended and aged e-liquids for $29.00 per 30 ml bottle. Black Note — and companies like them — add value to their e-liquids by blending uncommon flavors, using natural tobacco extracts and implementing proprietary aging and filtering processes. That’s the market that VaporFi recently attempted to tap into with the release of its Reserve Collection e-liquid line, and it’s the same customer base that Volcano hopes to attract with its Lava Line e-liquids.

Volcano advertises Grímsvötn as a combination of brambleberry skyr (cake), vanilla and mint. This was the first e-liquid that I tried from the Lava Line series, and my first reaction was that it is very sweet. I’m not just referring to the e-liquid’s flavor — I’m also referring to the scent that quickly fills the room when the e-liquid is used. If you plan to use this e-liquid in the same room as others who don’t vape or smoke, look out. They’re definitely going to notice the smell. Volcano’s new 50/50 VG/PG blend is excellent in the performance department, generating enormous plumes of vapor with ease. While I can definitely taste the berry notes in this e-liquid, the vanilla and mint notes are less evident. Also, I did find that this e-liquid had a rather strong “perfume” flavor. If you’re sensitive to that, this may not be the best Lava Line e-liquid to start with.

Vesuvius is meant to taste like biscotti with white chocolate, hazelnut and dried cherries. For me, the chocolate flavor was most prominent although I couldn’t specifically identify it as white chocolate. In fact, it tastes like the same dark chocolate flavor used in a handful of Halo e-liquids. That being said, I think I actually like Vesuvius better than any of Halo’s chocolate e-liquids. It is tastefully done and performs really well. The hazelnut flavor does a good job of rounding out the strong chocolate. The biscotti and cherry flavors are difficult to detect.

Fuji is my favorite e-liquid in Volcano’s Lava Line. For this one, Volcano blended a mandarin orange flavor with the floral essences of hibiscus and cherry blossom. While I find it a bit difficult to detect the flavors or scents of any specific flowers in this e-liquid, there is a definite floral note. It does a good job of eliminating any “furniture polish” notes that are so common in citrus e-liquids. This one is really tasty; if you like the flavor of mandarin oranges, I’d suggest Fuji as your starting point for exploring Lava Line e-liquids.

Volcano returns to its native state of Hawaii with the Diamond Head e-liquid, a blend of passion fruit, sugared orange and guava nectar. Those who live in or have visited Hawaii will immediately recognize this as the same flavor combination used in POG, the sweet fruit beverage available at every convenience store and supermarket. While guava nectar and orange juice are very sweet, it’s the passion fruit that gives POG its distinct tang. Unfortunately, I find the passion fruit flavor a bit too difficult to detect in Diamond Head e-liquid. While the vapor production of this e-liquid is every bit as good as in the other Lava Line flavors, I was hoping for something a bit more tangy here to balance out the other sweet flavors in the Lava Line.