It’s easy to look at the price of the VaporFi VOX 60 TC and balk. Costing $139.99 for the device alone or $189.99 for a package including a sub-ohm tank, the VOX 60 TC certainly isn’t cheap. You can find e-cigarettes elsewhere with similar claimed specifications for a fraction of the cost. On the other hand, I don’t think I’ve ever owned another e-cigarette that looks as lovely or feels as luxurious in the hand as the VOX 60 TC. So, what are you looking for in your next e-cigarette? Do you have a bit of money to spend on something that looks like a work of art? If so, the VOX 60 TC is a device that definitely merits your attention.

View the VaporFi VOX 60 TC starter kit or look at the device only. My links include an embedded coupon code good for a 12 percent discount on all VaporFi hardware.

About the VaporFi VOX 60 TC 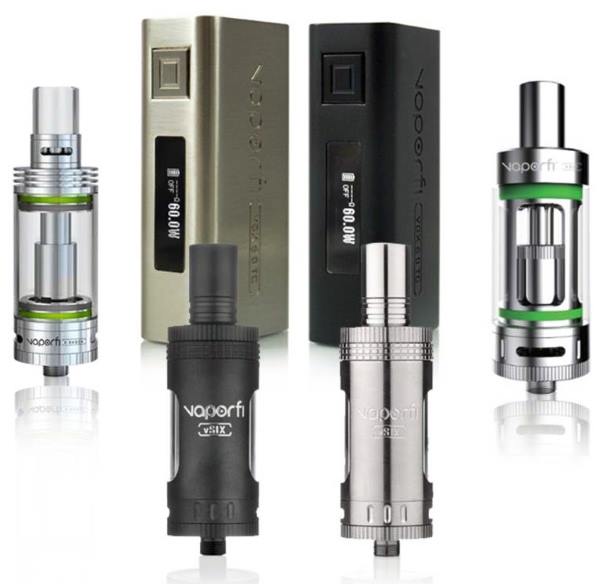 The VaporFi VOX 60 TC has a lovely brushed zinc alloy case and a bright OLED screen. It’s available in black and silver colors. I received the silver version from VaporFi, and I highly recommend it. It’s glossy and smooth, and it feels great in the hand. The VOX 60 TC has a 2600 mAh dual LiPo battery and operates at a maximum power level of 60 watts. It supports titanium and nickel temperature control coils, operating at up to 600 degrees Fahrenheit.

If you already have a tank or other attachment that you love, you can buy the VOX 60 TC on its own for $139.99 (123.19 with my embedded coupon). This package includes just the VOX 60 TC, along with a USB cable. The full starter kit costs $189.99 (167.19 with coupon) and includes your choice of three tanks, each of which have several accessories of their own.

The VaporFi VOX 60 TC is the first e-cigarette that I’ve owned to date with a “unibody” design similar to that of many Apple products. Most of the time, a box mod either has the top and bottom affixed with screws, or it has a removable bottom to facilitate battery replacement. The entire body of the VOX 60 TC is machined from a single block of zinc alloy, and only the top is secured with screws. It makes the entire device feel a lot more solid and less rattly than any other box mod I’ve owned. It’s also well ventilated, with 25 small holes on the bottom.

For comparison’s sake, I own a pair of ELeaf iStick 50 mods, branded as the Halo Reactor. They’re great devices. They’re cheap, they work well and they have excellent battery life. After a year of ownership, though, they’re both missing a bit of paint, both fire buttons rattle and the tops and bottoms are a bit loose. The two devices are functionally very similar, though, apart from the fact that the Halo Reactor doesn’t have temperature control support. So, is better build quality worth the extra cost? Only you can judge.

Out of all the e-cigarettes I own, I consider the VOX 60 TC the most beautiful. As such, it is the device I would most hate to drop. VaporFi does have silicone covers available the VOX 60 TC for $9.99. I’d hate to cover my pretty VOX 60 TC up, though, so I personally do without the cover. Yeah, I live dangerously.

Where LiPo batteries are concerned, the VOX 60 TC has really made me a believer. Out of all the devices I’ve owned to date with fixed internal batteries, the VOX 60 TC lasts the longest by far on a single charge. I also subjectively believe that the vapor production is a bit superior to my other box mods at the same wattage setting.

If you purchase the starter kit, the VOX 60 TC comes bundled with your choice of three different attachments: the vShock tank, the vSix tank or the Volt Hybrid tank. I own the Volt Hybrid tank, and I’m very fond of it. It’s based on the Kanger Subtank Mini, a popular tank with replacement coils available at virtually every vape shop. The Volt Hybrid tank also has an RBA deck that allows you to experiment with building your own atomizer coils.

The vShock and vSix tanks use wider coils with larger wick holes, so they’ll produce more vapor per puff than the Volt Hybrid Tank. They’ll also get hotter during use, though, and they’ll consume e-liquid more quickly. The vShock tank has an adjustable collar at the top that cools the vapor somewhat by introducing cool air before the vapor reaches your mouth. Having an airflow collar does mean that condensed e-liquid will sometimes leak out, though, so each tank has pros and cons. Of the three, only the vShock and vSix include temperature control coils. The vSix is the only tank of the three that supports top filling.

Out of all the e-cigarettes I currently own, the VaporFi VOX 60 TC is my favorite and the one I’d most hate to lose. It looks great, feels stellar in the hand and has a battery that simply refuses to quit. I suppose that some people might regret the fact that it tops out at 60 watts, but the power level makes little difference to me since I prefer long, deep puffs and don’t like the burned wicks that I usually end up with if I go too far over 30 watts.

If functionality is the only aspect of an e-cigarette that matters to you, you an get something functionally equivalent to the VOX 60 TC for far less if you go with a generic device. It won’t look nearly as nice, though, and it also may not come with VaporFi’s money-back guarantee. The choice is yours. I, for one, am very happy to own the VaporFi VOX 60 TC.

View the VaporFi VOX 60 TC starter kit or look at the device only. My links include an embedded coupon code good for a 12 percent discount on all VaporFi hardware.