The VaporFi Pro 3 is perhaps the most significant representation of the ultimate evolution that began with the original eGo e-cigarette a few years ago. The eGo was the first e-cigarette to successfully breach the design barrier and achieve mainstream popularity without relying on a cigalike design that mimicked a traditional cigarette. The eGo e-cigarette represented an easy upgrade path for smokers who had grown bored with the smallest e-cigarettes’ limitations.

The VaporFi Pro 3’s design is larger than a tobacco cigarette yet it’s smaller than most mechanical and box mods. Its size is similar to that of a smaller cigar. The battery offers a long-lasting capacity of 1000 mAh, and the tank accepts 2.5 ml of e-liquid. The atomizer is replaceable and contains a heating coil that is held in the tank to vaporize the e-liquid. The atomizers last for approximately one week, depending on the usage, and the cost is $17.99 for a five-pack.

The VaporFi Pro 3 kit is available in eight different colors. You can also buy the battery and tank in different colors if you like. A spare battery can be purchased separately for $29.99. The battery works while it charges, though, so you can skip the spare if you prefer.

Shop now for the VaporFi Pro 3. The kit costs $49.99. However, my link includes an embedded coupon code good for a 12 percent discount on all VaporFi hardware. 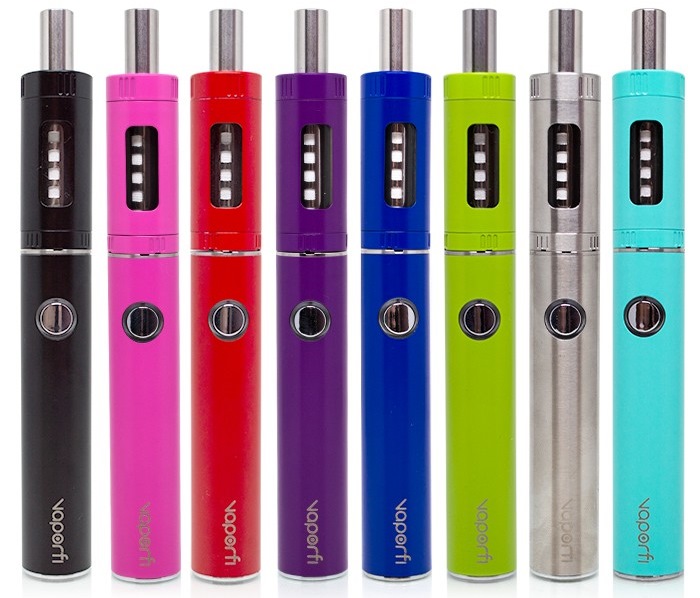 The VaporFi Pro 3 Is an Entry-Level E-Cigarette

This is definitely an e-cigarette for mouth-to-lung vapers. If you currently smoke, it’s likely that you draw the smoke into your mouth before inhaling to the lungs — so you’ll use the Pro 3 in the same way.

The VaporFi Pro 3 is also a perfect fit for flavor chasers. Its tall atomizer coil has lots of openings that expose the cotton wick, and the Pro 3’s coil quickly rises to the optimal vaping temperature. The VaporFi Pro 3’s flavor reproduction characteristics are very accurate, and it works well with any VG/PG ratio e-liquid.

When I first opened my smart looking box, I found that the VaporFi Pro 3 kit had been customized according to my specifications. The VaporFi Pro 3 kit includes one battery, one tank with a pre-installed atomizer, one additional spare atomizer, some extra o-rings and the USB charging cable.

As I mentioned above, the VaporFi Pro 3 comes is in eight different colors. The basic system is silver, but it can be purchased in black, green, red, pink, purple, cyan and blue.

Setting Up the VaporFi Pro 3

Setting up the VaporFi Pro 3 for the first time was a breeze. My review kit arrived with an already fully charged battery, but it’s always a good idea to top up a new battery before using it for the first time.

Wait approximately five minutes before you use the e-cigarette. Priming is complete when the cotton wick is wet with e-liquid. It will continue to draw the e-liquid from out of the tank until it is completely saturated. I noticed that the tank looked significantly less full at this point and I then topped it off.

When the tank is full and the battery is charged, the VaporFi Pro 3 is ready for vaping. Press five times quickly on the fire button to turn the battery on. Next, simply hold the button and use the Pro 3 like a real cigarette. 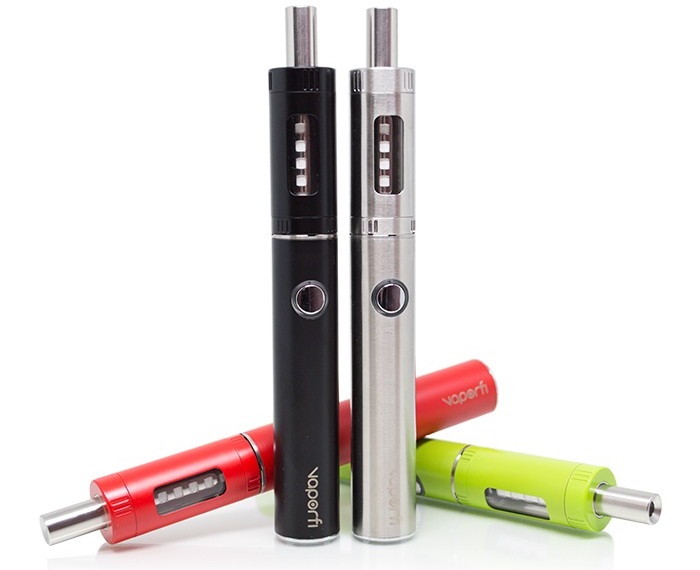 The VaporFi Pro 3 is an exceptionally good e-cigarette for beginners. It comes with a quick start guide with easy instructions for getting it quickly running the first time. It is even easy to get going for those who have never used an e-cigarette before. The tank fills from the top and this makes adding e-liquid much less messy than with bottom-filling tanks. Surprisingly, bottom tanks are still the most common on the market. A paper towel should be kept handy for changing the coil, but this is true for all e-cigarette tanks.

If you buy the VaporFi Pro 3, you’ll have an experience that’s marginally more complicated than the one you’d have with a cigalike. On the other hand, you’ll also have an e-cigarette that works with any e-liquid you’d like — take a look at my list of the best e-liquid companies for a few possibilities — and lasts far, far longer with a full tank and fully charged battery.

VaporFi’s ability to use different e-liquids is an important feature. It allows those who are new to e-cigarettes to explore and discover which e-liquids they prefer. Most beginner-level e-cigarettes operate best with thinner e-liquid formulations, but the VaporFi Pro 3 works with absolutely everything.

Another reason why I like the VaporFi Pro 3 as an e-cigarette for beginners is because its slightly restrictive airflow proves to be absolutely perfect for mouth-to-lung inhaling. It works exactly the same as smoking a real cigarette. There are many current e-cigarettes that work best for direct-to-lung inhaling, but they would best be used in the next step of vaping when the user has grown accustomed to vaping in place of smoking.

One thing that I love about the VaporFi Pro 3 is that it eliminates a need for the short “primer puffs.” Primer puffs are unnecessary with the Pro 3 because the coil heats up extremely quickly after the button is pressed. The maximum amount of vapor is achieved right away, even if the coil has completely cooled. 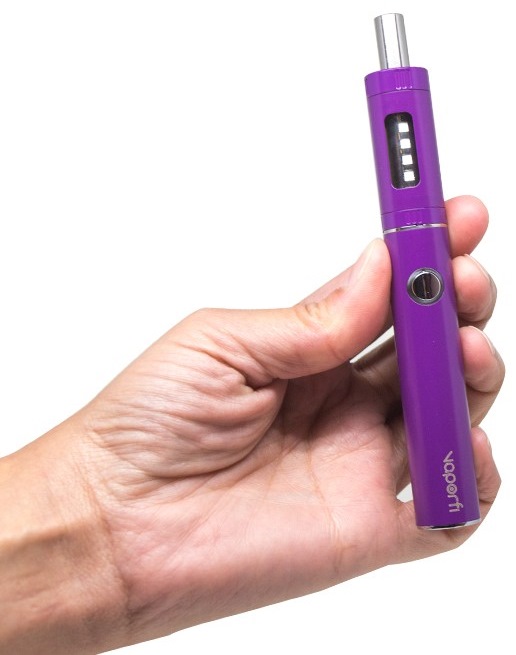 The VaporFi Pro 3 virtually eliminates another occasional vaping problem called the dry hit that often occurs when several consecutive puffs are taken without waiting for the wick to re-saturate. The VaporFi Pro 3 has so many wick holes that the coil stays wet as long as e-liquid remains in the tank. It even stays wet if I chain vape or use something other than VaporFi e-liquids.

The VaporFi Pro 3 1,000 mAh battery delivers several hours of vaping time between charges, depending on your vaping pace. When the device is used with a pace that is similar to smoking cigarettes, which is around 10-15 puffs per hour or two, the battery can last all day.

However, when people switch to vaping, they may increase their pace because the e-cigarette is more conveniently available and ready to use, plus it tastes so much better than tobacco cigarettes. When the VaporFi Pro 3 is used more often than a cigarette would be used, the battery can not last all day with one single charge. The battery does work while it is charging, and I have used it while it charged from my computer which was quite convenient.

When many people first try e-cigarettes, they choose e-cigarettes that look similar to tobacco cigarettes. There is, in fact, a lot of common sense in that choice. When I first decided to switch from cigarettes to vaping, I wanted something that looked as real as possible.

In truth, though, learning to fill a tank and swap out atomizer coils periodically isn’t actually hard. The VaporFi Pro 3’s tank design is well thought out and easy to use. You can gain a great deal by skipping over the cig-a-likes and moving straight into an e-cigarette tank system. You gain the ability to use every e-liquid on the market. You also gain a great deal more vapor production and battery life. Vapor production, of course, equates to satisfaction in my book, and it’s hard to put a price on satisfaction when you switch from smoking to vaping.

I believe it’s worth taking the few minutes needed to learn to fill a tank and to replace atomizers. If you feel the same, you should choose the VaporFi Pro 3 as your first e-cigarette.

Shop now for the VaporFi Pro 3. The kit costs $49.99. However, my link includes an embedded coupon code good for a 12 percent discount on all VaporFi hardware.