I’ve always had a hunch that there might be more female e-smokers than male ones, a fact that V2 Cigs — the world’s largest e-cigarette company by traffic volume — recently confirmed when it stated that the majority of its customers are women. In spite of the large number of female e-smokers, though, no company has really taken steps to design an e-cigarette for women. That’s all changed now, with the release of the V2 Cigs Vapor Couture line. I had already ranked V2 Cigs the best e-cigarette for beginners, so I was naturally quite excited to hear about this new product. How does it stack up? Find out in my Vapor Couture review.

Visit the Vapor Couture website. Vapor Couture kits start at $33.95 if you use the coupon vapegrl15 for a 15 percent discount on any order including a starter kit, and Vapor Couture ships anywhere in the world. 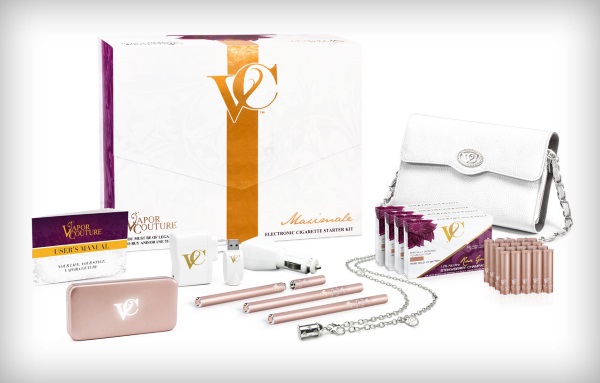 There’s a big difference between designing an e-cigarette to look nice and designing one to be fashionable. As soon as you start to think about fashion, you’ve got to worry about a lot of extra things. Do you sacrifice function for form? Are you able to update the product seasonally or when buyers’ tastes change? What about packaging? Do you design a completely original package or do you use existing products for inspiration and risk turning some people off? Some people may think of an e-cigarette for women as a bit of a money grab, but when you consider the fact that anything designed to be fashionable carries the risk of being a total bomb, I actually think Vapor Couture is a pretty gutsy move on V2’s part.

So, what exactly makes Vapor Couture an e-cigarette for women? The name of the game here is getting a fashionable look in a slim e-cigarette that doesn’t compromise on vapor production and bundling it with accessories that V2 hopes will appeal to female consumers. So, the batteries come in four different colors, a few of which I haven’t seen elsewhere. Each battery has a crystal tip instead of the plain LED on the end of most e-cigarettes. Vapor Couture’s refill cartridges come in the same four colors, so you can mix or match as you like. There’s a page on the Vapor Couture website where you can try every possible color combination and find the one you like. There’s also a cute carrying case that I’ll discuss in a bit. 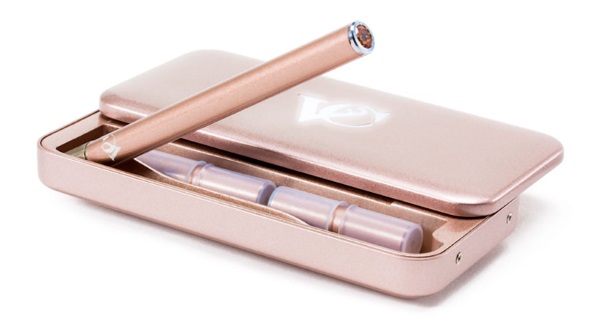 Vapor Couture refill cartridges start at $12.95 per five-pack. Once you find your favorite refill flavor, you can save money in the future by buying it in bulk. The bulk price is $44.95 for 20 cartridges ($14.85 savings) or $74.95 for 40 cartridges ($44.65 savings). In addition, you can use the coupon code vapegrl to save 10% on any Vapor Couture purchase that doesn’t include a starter kit. 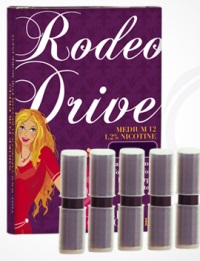 In case you’ve never used an e-cigarette before, I’d like to give you a quick rundown of how Vapor Couture works. When you remove the batteries from the package, you’ll want to immediately begin charging them by screwing one of the batteries into the terminal on the end of the USB charger and connecting the charger to a USB port or to the wall charger included with the Vapor Couture kit. The indicator light on the charger will let you know when you can remove the battery.

Next, remove one of the refill cartridges and take the seals off of the top and bottom. Screw the cartridge into the battery, place the e-cigarette in your mouth and take a long, gentle puff. Remember that this isn’t a real cigarette, so puffing harder won’t give you more smoke. Try puffing for five seconds or more for the most vapor. That’s it! Vapor Couture’s batteries last up to around 100 puffs or six hours before you’ll need to recharge them, while the cartridges last up to around 200 puffs each. So, one cartridge and two charged batteries should get you through even the longest work days — and that’s where the smartphone clutch comes in. 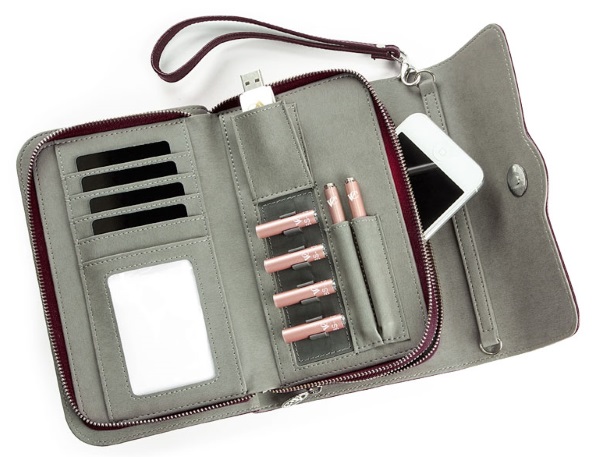 At the time of writing, you can choose from six different cartridge flavors with your Vapor Couture starter kit: Bombshell, Rodeo Drive, Fresh Mint, Passion Fruit, Strawberry Champagne and Arctic Mint. Bombshell is V2’s interpretation of a Turkish tobacco flavor like Camel, while Rodeo Drive tastes more like an American tobacco blend such as Marlboro. The remaining flavors are self explanatory. I like the Rodeo Drive flavor quite a bit and menthol lovers should appreciate the Fresh Mint flavor, which fuses menthol with notes of smooth tobacco and peppermint. If you start with the Vapor Couture Sampler Kit, of course, you’ll get an opportunity to try all four of the refill flavors with your first order.

So, does Vapor Couture really work as an e-cigarette for women? As with everything else in fashion, it’s a matter of personal taste. Vapor Couture offers a few very interesting features that the standard V2 line doesn’t. It keeps V2’s signature vapor production and high-quality refill flavors, but adds a slimmer battery, great color options and a more fashionable carrying case. Based on my experience, I’d have to call Vapor Couture a major success. Buy Vapor Couture now or take a look at my V2 Cigs review to learn about the standard V2 kit.

Visit the Vapor Couture website. Vapor Couture kits start at $33.95 if you use the coupon vapegrl15 for a 15 percent discount on any order including a starter kit, and Vapor Couture ships anywhere in the world.