Whether you call it vape tongue, vaper’s tongue or simply vaping fatigue, the symptom is the same: you’re no longer able to taste your e-liquids. Vape tongue is one of the more common complaints reported by frequent e-cigarette users. While no one agrees on a single effective solution for vape tongue, my research suggests that there are quite a few different reasons why someone might suddenly become unable to detect the full range of flavor in an e-liquid. Curing vape tongue, then, might be as simple as identifying the cause. 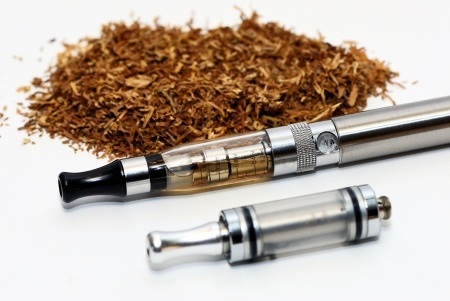 Experts believe that taste bud fatigue primarily occurs for two reasons: either you’ve consumed too much of a single strong flavor or you’ve consumed too many things that are similar — but not exactly the same — and can no longer taste their differences. With e-cigarettes, these same scenarios can lead to vape tongue. Is your favorite e-liquid an extremely strong cinnamon flavor? Have you been spending time sampling as many tobacco or custard e-liquids as possible in hopes of finding a favorite? Citrus and other very tart e-liquids may also contribute to vape tongue.

The base substances used to create e-liquids — propylene glycol and vegetable glycerin — have the ability to absorb and trap water. This can lead to dry mouth and ultimately dehydration. On their own, these conditions can make flavors more difficult to perceive. When you vape, though, dehydration is made worse by the oily film that can form on the tongue, covering the taste buds. To date, scientific studies concerning e-cigarettes have focused primarily on issues such as air quality and potential cancer risk. Therefore, there are no solid guidelines regarding how much a person should increase his or her water intake when vaping.

However, there are some generalities that you might find helpful. If your mouth consistently feels dry when vaping, increase your water intake. According to the Mayo Clinic, mild to moderate dehydration can also cause decreased or yellower/darker urine, dry skin, headaches, constipation, dizziness or lightheadedness. In these situations, it might be wise not only to increase your water intake, but also to consider cutting back on vaping a bit. You may find that this alleviates vape tongue as well as a variety of other conditions.

Use Only One E-Liquid

Vape tongue can occur as a result of using too great a variety of e-liquids in a short timespan. Some people, for example, have several different tanks or cartomizers that they keep filled with all of their favorite flavors. This allows them to switch from one e-liquid to another at will. Other people like to sample as many e-liquids as possible within a specific flavor category, such as menthols or caramel flavors. This can end up creating a situation similar to what you might experience when sampling many different perfumes at once — you can’t discern the subtle differences between different e-liquids any more and can only taste the base notes. Try limiting the variety for a while and sticking with just one favorite flavor.

I mentioned above that the oily substances in e-liquid, combined with a lack of adequate hydration, can cause a sticky film to form inside the mouth. As you can probably imagine, this can really dull one’s sense of taste. Good oral hygiene is obviously wise for anyone, but it is especially important when your mouth is constantly filled with vaporized vegetable glycerin. Consider adding a tongue scraper to your oral care routine, as well; it can help to break up this film while also removing dead cells, food particles and microorganisms.

For some e-smokers, a good palate cleanser is all that’s needed to cure vape tongue. Some of the most popular palate cleansers include water, milk, coffee, tea, lemons, lemon sorbet, dark chocolate and pickled ginger. According to a study published in the March 2009 issue of Chemosensory Perception, though, plain table water crackers are the most effective of all palate cleansers. The study found that water crackers were effective in cleansing the palate of all food types tested. In 2014, Wine Enthusiast asked six sommeliers what they used to cleanse their palates between wine tastings. Their suggestions included pineapple, banana, beer, tortilla chips, beef and Chablis.

As you’re likely aware, our overall perception of taste comes from our sense of smell as well as our taste buds. Many people explore this phenomenon at a young age by attempting to taste various foods while holding their noses. Unless you happen to be a supertaster, you’ve no doubt noticed that holding your nose severely diminishes your ability to taste food. In this way, olfactory fatigue can cause vape tongue. This is particularly likely if you exhale through the nose or sample many different e-liquids in a short timespan. The most popular solution for olfactory fatigue, bar none, is coffee beans. In fact, some perfume sellers keep coffee on hand for customers to sniff between samples. However, this creates a bit of a problem for those whose olfactory fatigue results from sampling many coffees. In this case, coffee experts suggest that the next best solution is your own skin, sans perfume or cologne. If you’re suffering from vape tongue and nothing else seems to work, try taking a whiff of your own arm. It just might help!

Illness Can Cause Vape Tongue

If you have a cold, you’ve probably noticed that it can result in a diminished ability to taste your food. The same would be true of your e-liquid. Many common classes of medications are also linked with changes in perceived taste, including some antihistamines, antibiotics and some cholesterol and heart-related medications. If you believe that a medication you’re taking is changing the taste of your favorite e-liquid, finding a solution might be as simple as finding a different e-liquid unless you are only using the medication temporarily. If you are unable to taste your foods and e-liquids because of illness, try switching to an unflavored e-liquid until you start to feel better.

Some people believe that the taste of a newly mixed e-liquid can be improved by “steeping,” or allowing the bottle to rest unused for several days or weeks. During this process, the nicotine in the e-liquid begins to oxidize and some alcohol-based flavors may begin to evaporate. Although I personally have never owned a bottle of e-liquid that I thought improved with age, many e-smokers do swear by this technique. One thing everyone agrees on, though, is that there is a point where an e-liquid simply dies. If you have ever put a bottle of e-liquid away and forgotten about it for several months, you probably found that it tasted virtually nothing like you remembered. This isn’t a case of vape tongue — it’s simply that the e-liquid has aged for far too long and lost most of its flavor.

Whether your preferred vaping setup uses cartomizers, atomizers or tanks, one component is almost always the same: the heating coil. Over long periods of repeatedly vaporizing oily e-liquids, residue will begin to collect on the coil. This leads to two problems. First, the coil will have difficulty working as well as it should, leading to diminished vapor production and flavor. Second, a portion of what you inhale will be the residue collected on the coil, which will alter the flavor of your e-liquid in ways you won’t enjoy. If your equipment is old and dirty, it might cause a sensation similar to that of vape tongue. Many e-smokers advocate cleaning old coils in grain alcohol or hot water. Personally, I have never found this to restore much of the coil’s original performance. This solution might work as a temporary stopgap, though, until you are able to obtain a new coil.