The story of the e-cigarette industry is one of extremes. On one end you have companies like V2 Cigs offering extremely decked-out e-cigarette kits with all of the accessories a person could possibly need, and on the other end it’s a race to the bottom with companies competing against one another to offer the lowest priced kits possible to entice smokers to give e-cigarettes a try. The Vapage Pocket Pack falls into the second category. With a price tag of $29.99, the Vapage Pocket Pack includes only the bare essentials necessary to try e-cigarettes: a battery, a few pre-filled cartridges and a USB charger. It’s also priced a bit higher than competing offerings from other companies. So, how does the Vapage Pocket Pack stack up? Find out in this Vapage review.

View the Vapage Pocket Pack at the Vapage website. It costs $19.99 and ships to the United States and much of the world. 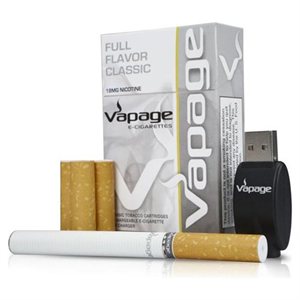 About the Vapage Pocket Pack

The Vapage Pocket Pack is, to be sure, a no-frills e-cigarette kit. Inside the cigarette-style pack are a single KR-808 battery, a USB charger and four refill cartridges. Unlike the disposable e-cigarettes that are so popular recently, you can actually keep the Vapage e-cigarette battery and simply buy refill cartridges in the future if you want to keep e-smoking. Vapage cartridges cost $14.99 per five-pack and are available in a variety of different flavors, but the Vapage Pocket Pack is available in just three flavors: Red Tobacco, Classic Tobacco and Classic Menthol.

The KR-808 e-cigarette is one of the most popular designs available today, probably because it’s so easy for newcomers to get started with. All you need to do is connect a cartridge to the battery and puff. If something goes wrong, you’ve got only two things to troubleshoot. If the battery light is blinking, charge it. If it’s not blinking, replace the cartridge. This design certainly isn’t unique to the Vapage Pocket Pack, though; it seems like just about every e-cigarette company is using it these days.

Putting myself into a smoker’s shoes, I think it would be pretty cool to open a familiar looking pack and experience something that’s so similar to smoking, yet so different. Having owned more than a few e-cigarettes that shipped in cigarette packs, though, I can say that it’s not the greatest way to store an e-cigarette. Think about the beating that some cigarette packs take after just a day or two of use — and after every 20 cigarettes, you throw the pack away and buy a new one. That won’t be true with the Vapage Pocket Pack; if you carry it around for more than a couple of days, it’s going to become pretty tattered. Also, the pack isn’t large enough to store the Vapage e-cigarette with a cartridge attached. So, while the Vapage Pocket Pack has some interesting packaging, I would have preferred a more durable plastic case. 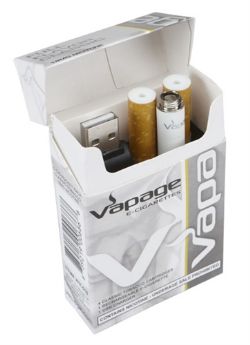 My Vapage Pocket Pack came in the Classic Tobacco flavor. It’s a nice, nutty flavor that doesn’t exactly taste like tobacco but serves as a good enough introduction to the experience you can expect from e-cigarettes. Unfortunately, Vapage made the rather odd design decision of going with an automatic battery that’s completely sealed at the top. This protects the inside of the battery from an errant drip of e-liquid but makes the draw on the e-cigarette tight, limiting the vapor production.

As I write this Vapage review, the Vapage Pocket Pack is on sale for $19.99. The sale will be over by the end of the week, but I can’t help but wish the price change would be permanent. I recently looked at a variety of cheap e-cigarettes, and although the Vapage Pocket Pack wasn’t the lowest-ranked product in the lineup, it was difficult for me to recommend it when the NJOY Recharge kit includes more batteries, more cartridges and a money-back guarantee for under $21. There isn’t anything particularly wrong with the Vapage Pocket Pack, but it would be hard to convince people to pay the asking price when they know they can shop elsewhere and get something better for less.

View the Vapage Pocket Pack at the Vapage website. It costs $19.99 and ships to the United States and much of the world.