If you spend any amount of time reading about the latest happenings in the e-cigarette industry, you’re well aware that the FDA has designs on reining in the growth of the e-cigarette business and restricting how e-cigarette products can be marketed. If you have a large e-cigarette company and want to ensure that it remains large through these changes, what do you do? If you aren’t looking to get bought out by Big Tobacco, your best bet is to set your company up to deal with any possible contingency. That’s exactly what V2 Cigs has done with the V2 Pro Series 3 Vaporizer, an e-cigarette that can handle e-liquid, loose leaf tobacco, nicotine gel or wax and essential oils. The V2 Pro Series 3 takes some interesting design cues from tech companies such as Apple, and its flexibility and power are available at a surprisingly low price point.

View the V2 Pro Series 3 Vaporizer. The kit costs $59.99 and is supported by the V2 Pro six-month warranty. If you’re in Europe, click this link instead. V2 Cigs coupon codes do not apply to V2 Pro products.

I have long called V2 Cigs the best e-cigarette for beginners, but after a year or so of using an e-cigarette some people begin to feel the urge to upgrade to something a little larger. Some do it for higher wattage and increased vapor production, while others want to enjoy increased battery life or larger e-liquid tanks. Until now, V2 hasn’t had anything for that audience. Instead of simply putting their logo on an off-the-shelf APV, though, V2 has gone the extra mile and designed something that is entirely their own.

The V2 Pro Series 3 is roughly the size of an eGo e-cigarette and has no threading for attachments. Instead, it supports three magnetic drop-in attachments for e-liquid, loose leaf and essential oils, all available from V2. Obviously, the fact that the attachments are proprietary means that, by buying the V2 Pro, you’re locked in to V2’s ecosystem. However, tank prices are extremely reasonable — $7.99 for e-liquid cartridges or $24.99 for loose leaf and essential oil cartridges. You can use any e-liquid you like, though, and the benefits of V2’s ecosystem are quite compelling. The V2 Pro eliminates many common issues with e-cigarettes, particularly leaky tanks — one of my biggest pet peeves.

Correction: This review was edited to remove the incorrect assertion that the dimple and raised area at the top of the cartridge indicates to the V2 Pro which type of cartridge you’re using.

V2 Pro Series 3 as an E-Cigarette 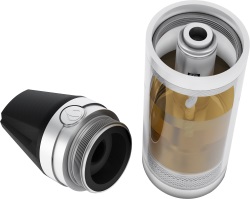 Testing the V2 Pro Series 3, I immediately noticed some design elements that e-cigarettes have sorely needed for quite some time. The breakaway magnetic charger is incredibly convenient and the magnet is strong enough to hold the vaporizer in place when allowed to dangle vertically. The charger also has a light at the tip, making it easy to find in any lighting. What’s even more impressive is the fact that I was able to charge the V2 Pro upside down without a drop of e-liquid leaking out. In fact, the e-liquid cartridge is a completely sealed environment; unless liquid gets inside the center air tube, there seems to be no possibility of leaking through the top or bottom. The V2 Pro works while charging and charges through a USB port or wall/car adapter.

The V2 Pro e-liquid cartridge is essentially a wick-fed top coil clearomizer. As such, the vapor produced can be quite warm in comparison with bottom-coil attachments and can begin to produce burned flavors if you run the device too hard. The V2 Pro cuts off after approximately ten seconds of holding the fire button to help prevent this from happening. Although the e-liquid tank sadly isn’t enclosed in glass, it is a particularly nice plastic that doesn’t bend when pushed and shouldn’t crack when certain e-liquids are used.

If you’re a throat hit chaser, it would be hard to find anything better than the V2 Pro Series 3 in this price range. After several days of using nothing but the V2 Pro in preparation for this review, I’ve been consistently amazed by the volume and strength of the vapor clouds this device produces. I would say it’s definitely comparable to something like the Lavatube e-cigarette, at half the cost — and has roughly the same battery life at a much smaller size.

V2 Pro Series 3 as a Tobacco or Essential Oil Vaporizer 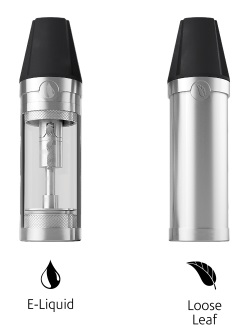 In compiling my V2 Pro Series 3 review, I did have one obstacle in that I was unable to test the device as a tobacco or essential oil vaporizer. Since switching to e-cigarettes, I no longer use tobacco products due to the concern that it might lead me back to tobacco smoking. I’m sure that’s something you can appreciate if you’ve made the switch to full-time e-smoking yourself. In addition, V2’s essential oil cartridge has not yet been released as of the time of writing. According to the information on V2’s website, the essential oil cartridge will be released in September 2014 and will also support nicotine gels and waxes. I’m not too familiar with these products, but I imagine that nicotine gels and waxes might become popular if e-liquids should ever become more difficult to buy.

If you use the V2 Pro Series 3 as a tobacco vaporizer, you can expect the chamber to maintain a temperature between 160-180 degrees Celsius and can enjoy approximately 12 vaporizing sessions between battery charges. If you currently use a vaporizer with a built-in herb chamber, you’re likely to enjoy the fact that the V2 Pro Series 3 uses a removable chamber which should be much easier to clean.

The Series 3 vaporizer is the first of three new APVs forthcoming from V2 Cigs within the next year. These vaporizers will use progressively larger cartridges that, best as I can tell, won’t be interchangeable with any Series 3 hardware. Should you wait, then, to see if you’d rather have one of the more expensive upcoming models? In my opinion, you should really only wait if you’re already using a more expensive e-cigarette such as ProVari and aren’t interested in vaporizing tobacco or solid nicotine products. I have a feeling that the V2 Pro Series 9 might end up being the first APV capable of beating the ProVari head on, but it’ll be several months before we know for sure.

2015 Update: Read my V2 Pro Series 7 review! The V2 Pro Series 9 has been removed from the V2 Cigs website. Its future is currently uncertain.

The V2 Pro Series 3 has some of the most intelligent design I’ve ever seen in an e-cigarette. Although I’ve heard of tobacco and herb vaporizers that utilize off-the-shelf eGo batteries, the V2 Pro is — as far as I’m aware — the only vaporizer designed from the ground up to handle e-liquid, loose leaf and essential oils or solid nicotine products. This makes the V2 Pro the perfect choice, for example, if you have concerns about a possible ban on flavored e-liquids. If you should ever find yourself unable to obtain e-liquid and need a way to continue getting nicotine without smoking, you’ll already have it.

At present, though, it doesn’t look like e-cigarettes are going away any time soon — and the more traction they gain in the market, the more difficult it will be for lawmakers to get rid of them. So, what’s more important is whether the V2 Pro Series 3 is the right e-cigarette for you now. Having spent a great deal of time with the V2 Pro, I find it to be a truly remarkable device in many ways. If you use a two-part e-cigarette or a mod, you’re locked into a constant cycle of battery management because your device doesn’t work while a battery is charging unless you have a spare. If you use a device with a permanent internal battery, you probably experience less than satisfying vapor production — a problem that the V2 Pro somehow manages to avoid.

What’s even more impressive is the fact that the V2 Pro Series 3 holds such a large volume of e-liquid without leaking. If you’ve ever experienced the horror of having a cartomizer tank empty its contents on your hands because an o-ring suddenly gave way, you’ll know exactly what I’m talking about. You don’t have to avoid holding the V2 Pro a certain way and don’t have to remember to remove the cartridge before charging it — it just doesn’t leak because it’s designed not to.

Unlike many newer e-cigarettes that simply claim to feature more intelligent designs than the e-cigarettes of the past, the V2 Pro Series 3 actually brings something entirely new to the table. If you haven’t switched to e-smoking yet or are still looking for the perfect e-cigarette, the V2 Pro might be exactly what you’re looking for.

View the V2 Pro Series 3 Vaporizer. The kit costs $59.99 and is supported by the V2 Pro six-month warranty. If you’re in Europe, click this link instead. V2 Cigs coupon codes do not apply to V2 Pro products.

In 2014, Reynolds American purchased Lorillard, combining the second and third largest US-based tobacco companies into a single entity. As part of the deal, Reynolds sold the Blu e-cigarette brand to UK-based Imperial Tobacco.