In June, V2 Cigs conducted an informal survey of 600 e-cigarette users to ask for their thoughts on the FDA’s new vaping regulations. A surprising 44 percent of respondents had no knowledge of the regulations at all. So, if you’ve noticed a sudden flood of new e-cigarette products like the V2 Cigs VERTX over the past few weeks, it’s forgivable that you might not have been certain why so many new products were suddenly coming out. E-cigarette companies tried to inform consumers of the regulations that could wipe out — or at least negatively change — the vaping industry, but it seems that many consumers were still left in the dark.

The sudden flood of new products has to do with the first cutoff date in the FDA’s e-cigarette regulations: August 8. After that date, no company in the United States can legally market a new e-cigarette or e-liquid without an approved pre-market application. Any product introduced before that date can remain on the market for two years pending approval.

So, the V2 Cigs VERTX represents an attempt to get a modern product to the market before the door closes on August 8. It’s also a closed-system e-cigarette designed to encounter the fewest possible hurdles on the road to eventual FDA approval. Most importantly, the VERTX e-cigarette should appeal equally to new and experienced e-cigarette users.

View the VERTX and VERTX Plus at the V2 Cigs website. Use the coupon code VAPEGRL when checking out for a 10 percent discount on your order. 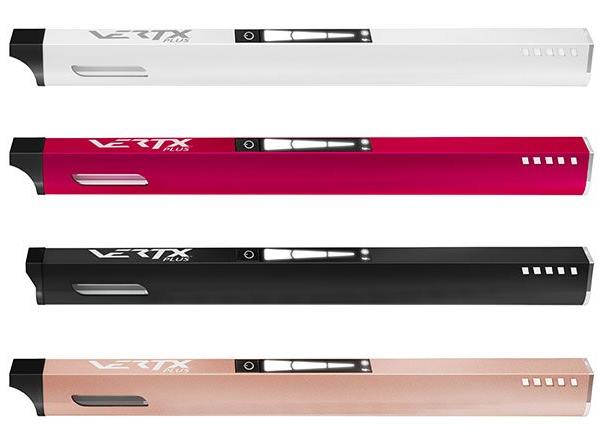 About the V2 Cigs VERTX

The VERTX system brings some of the technologies that V2 Cigs pioneered with the V2 Pro series — magnetic connections, drop-in cartridges and higher vapor production, to name a few examples — to a micro e-cigarette. V2 offers two versions of the VERTX. The basic VERTX costs $49.95, while an upgraded version with variable power levels costs $89.95.

The VERTX Plus also has a touch-sensitive panel that allows for quick power adjustments. Aside from the variable power of the VERTX Plus, the two e-cigarettes are the same. They have the same battery capacity and use the same cartridges and charging cable.

V2 sells pre-filled cartridges for the VERTX at $14.95 per three-pack. It might be more accurate, though, to call the cartridges “tanks.” Each one holds enough e-liquid for about 650 puffs, and the clear design makes it easy to see how much e-liquid remains. Considering that an average tobacco cigarette yields around 10-15 puffs, I think it’s reasonable to expect one VERTX cartridge to provide the equivalent of about two packs of cigarettes.

The VERTX doesn’t have a removable battery, but it does work while charging. Also, while the instruction manual does mention “blank cartridges,” empty cartridges for the VERTX aren’t available yet at the time of writing. V2 does plan to introduce them later in 2016, but I don’t know if that’s going to be possible because the August 8 cutoff date has passed. Maybe the cutoff date doesn’t apply to accessories such as cartridges and tanks.

A Path to FDA Compliance

The FDA estimates that a single pre-market application will cost about $350,000 and require 5,000 staff hours — or more than a full year of work for 2.5 full-time employees — to complete. To make matters worse, each flavor of an e-liquid — and each nicotine strength for each flavor — counts as a separate product. So, gaining FDA approval for a diverse e-cigarette line with lots of potential for customization seems pretty much impossible.

It should be possible, though, for an e-cigarette company with a large budget to gain FDA approval for an e-cigarette with little to no room for customization. That’s what the V2 Cigs VERTX represents: an attempt to create an e-cigarette that remains within the FDA’s boundaries while providing enough performance to satisfy smokers who don’t want to return to tobacco.

VERTX vs. VERTX Plus

Under the hood: This picture details the circuity controlling the functionality of the V2 VERTX Plus.

As I mentioned above, the VERTX Plus has three power levels ranging from 3.5 to 4.5 volts. A touch-sensitive panel allows for quick adjustments. Otherwise, the two devices are the same. The touch panel on the VERTX Plus feels a bit like a gimmick to me, since I suspect that most users will simply set the device to the highest power level and leave it there. The touch panel is very responsive, though. V2 provided the VERTX Plus to me for this review, so I didn’t have the opportunity to test the standard VERTX. My guess is that it operates at 3.5 volts. So, the standard VERTX more than likely produces less vapor than the VERTX Plus, but the battery probably lasts longer.

The V2 Cigs VERTX battery arrives with a partial charge, so you’ll want to connect it to the USB charger to top up the battery before you begin using it. The charger attaches to the bottom of the VERTX magnetically, and it should work through any USB port. You can turn the VERTX on and off by pushing the fire button five times quickly. From there, simply drop in a cartridge and hold the button to vape.

As I mentioned above, one V2 VERTX cartridge should be more than sufficient for a full day of vaping — longer in many circumstances. The body of the VERTX has a window on the side that allows you to see the remaining e-liquid easily without removing the cartridge. 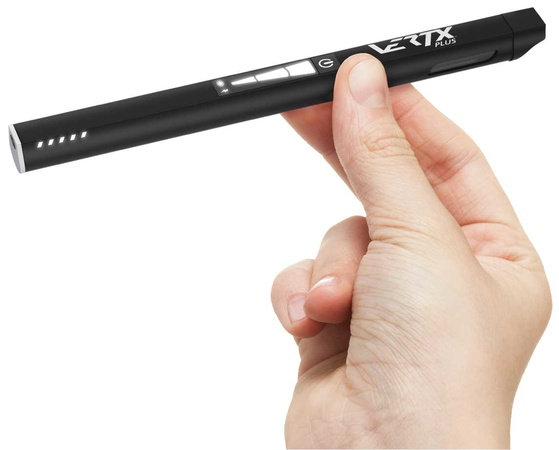 The vapor production of the VERTX Plus is excellent; in my estimation, it’s about on par with the V2 Pro Series 3. At the time of writing, V2 isn’t producing VERTX cartridges in all of its flavors. The six flavors that are available are Congress, V2 Red, Sahara, Menthol, Green Tea Menthol and Peppermint. The flavors are exactly the same as the ones that V2 sells by the bottle and in cartridge form for the original V2 Cigs e-cigarette.

The VERTX cartridges work very reliably. During my testing, I didn’t experience a “dry hit” at any voltage level. The cartridges are about as leak-free as one could reasonably expect given the amount of liquid that they hold. The air tube leading out of the cartridge does tend to collect a bit of condensation, though, so you can expect a drip here or there if the VERTX spends too much time upside down.

The V2 Cigs VERTX is a superb e-cigarette for beginners. It’s reliable, affordable and looks really sharp. The huge cartridges are priced fairly and hold enough e-liquid to guarantee more than a full day of vaping time for anyone who uses the device with the same pace that they would a real cigarette. If you like the flavors and performance of the VERTX, you can have exactly the same experience — only more of it — by upgrading to a device like the V2 Pro Series 7 later, because the V2 Pro series uses much of the same technology and all V2 e-liquid flavors are available by the bottle.

Most importantly, the V2 Cigs VERTX is a device that’s positioned to give you the best performance possible while staying within the new regulations that the FDA has set forth. You can be almost certain that e-cigarettes such as Blu and Vuse will still be around two years from now, since Big Tobacco companies own those products and have the money to run the battery of tests that the FDA requires. Blu and Vuse will never give you the kind of vapor production or battery life that you can get from VERTX, though.

Although VERTX may have the performance of a high-end vaporizer, it uses the type of closed-system design that should help it sail through the FDA approval process without a hitch. Over the next two years, many popular e-cigarettes will disappear unless a court forces the FDA to change the wording of its e-cigarette regulations. Only the largest e-cigarette companies will have the money to complete the pre-market approval process, and the only e-cigarettes likely to gain approval are those with as little room for customization as possible. So, if you’re a smoker who wants to switch to e-cigarettes right now, there is probably no better choice than the V2 Cigs VERTX. Two years from now, it’ll still be around — and it’ll still have the performance necessary to ensure your satisfaction.

View the VERTX and VERTX Plus at the V2 Cigs website. Use the coupon code VAPEGRL when checking out for a 10 percent discount on your order.