If you’ve been familiar with e-cigarettes for more than a few years, there’s a good chance that the NuvoCig brand was among the first to ever catch your attention. With mall kiosks and a website in operation since 2010, NuvoCig is one of the oldest e-cigarette brands in the United States. From the beginning, NuvoCig established itself as an inexpensive alternative to the better known brands such as Blu, but it wasn’t until a recent product redesign that the brand really began to catch my eye. With its new steel-tinged batteries and cartridges, NuvoCig has more eye appeal than ever with starter kit prices that remain extremely competitive. However, Blu isn’t the biggest player in the e-cigarette industry anymore. Today, e-cigarette companies have to play in a field dominated by VaporFi. In this NuvoCig review, I’ll explain how the plucky underdog stacks up.

View the selection of starter kits at the NuvoCig website. Kits start at $24.99 and include a one year warranty and 30 day money back guarantee. Orders over $60 ship free. 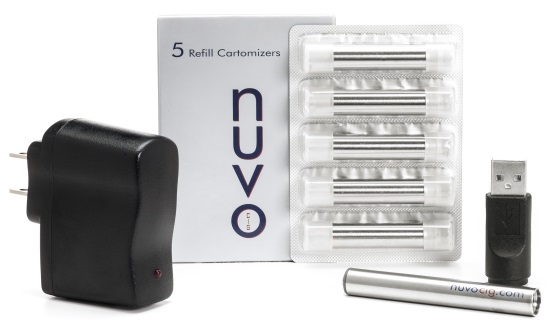 The NuvoCig is a 510 e-cigarette with a rated battery capacity of 180 mAh, good for up to about 100 puffs per charge. Although the basic starter kit is available only in Tobacco and Menthol flavors, the full lineup of refills has an expanded selection of flavors including peach, apple and cinnamon. If you’ve seen a lot of KR-808 e-cigarettes such as the model sold by V2 Cigs while browsing online, you’ll be pleasantly surprised by the smaller size of the 510 model — it’s around the same length as a “100s” cigarette. However, there are two trade-offs: V2’s KR-808 battery is rated for higher-voltage operation, which causes it to produce a bit more vapor. V2 also uses a higher-capacity battery, slightly larger than the one sold by NuvoCig.

NuvoCig’s price for refill cartomizers is quite a bit higher than the norm; $19.99 is good for a pack of five cartomizers in any of NuvoCig’s 19 different flavors. Buying five packs at once will give you a 25 percent discount, but even the $15.99 discount price is higher than the base price many companies offer. On the bright side, you can still enjoy NuvoCig’s stylish design by buying a NuvoCig starter kit and getting your refills elsewhere. For example, the NuvoCig e-cigarette is compatible with cartomizers sold by Volcano and Blu. Volcano’s cartomizers cost $9.99 per five-pack.

The two points most strongly in favor of NuvoCig are that the company’s batteries work extremely well and look great. Although stainless steel might not be to everyone’s liking, I much prefer it over the flat black or white batteries many e-cigarette companies still offer. For those who prefer something a bit more on the flashy side, NuvoCig also offers an innovative battery with a color-changing light that cycles through seven different colors as you puff. The refill cartridges, though more expensive than average and most likely not American in origin, do taste fresh and function well. The cartridges are sealed with foil to prevent liquid from escaping — if you have any experience with e-cigarette companies that ship its cartridges in paper boxes, you’ll know the foil makes an enormous difference in freshness.

In fact, I have nothing negative to say about the NuvoCig e-cigarette at all; the product looks sharp, works well and tastes great. What’s not to like? The $19.99 price for refill cartomizers represents NuvoCig’s only downside, but it’s a rather big one. Compared to some other companies offering 510 e-cigarettes, you’ll spend as much as double on your refill cartridges with NuvoCig. So, although NuvoCig is an easy e-cigarette to like, it’s a hard one to recommend unless you’re willing to buy in bulk or shop around for better refill prices.

View the selection of starter kits at the NuvoCig website. Kits start at $24.99 and include a one year warranty and 30 day money back guarantee. Orders over $60 ship free.