Until just a few weeks ago, I had never heard of PAX Labs. That all changed when I saw a post on the Tobacco Analysis blog about a new form of e-liquid that utilized a salt of nicotine rather than the freebase nicotine generally found in e-liquids. According to a study commissioned by PAX Labs, the new e-liquid creates a spike in the concentration of nicotine in the blood similar to what would be experienced when smoking a real cigarette. It also creates a higher sustained blood-nicotine levels than would be achieved with a traditional e-liquid. This new e-liquid appears to be unique enough that PAX Labs has seen fit to apply for a patent.

As it turns out, PAX Labs has also been able to attract some investment dollars with this new product — $46.7 million, to be exact. As fate would have it, I was just putting the finishing touches on an article about this topic for eCig One when PAX Labs got in touch to see if I’d be interested in receiving a JUUL e-cigarette review sample. I jumped at the chance. After spending some time with the JUUL e-cigarette, I can safely say that it’s one of the most unique vaping devices I have ever tried. The JUUL isn’t perfect, but it is definitely worth considering if you’re still shopping for your first e-cigarette or have been unable to switch to e-cigarettes completely.

View the JUUL e-cigarette. The starter kit costs $49.99 and includes four refill cartridges. The JUUL includes a one year warranty and ships for free.

About the JUUL E-Cigarette

As you have no doubt noticed from the picture above, the JUUL e-cigarette is entirely unique in design. The battery is rectangular in shape, but shorter than many cig-a-like designs such as the KR-808 e-cigarette. Although the battery housing is metal rather than plastic, it feels lighter than all but the lightest disposable e-cigarettes. It is probably light enough to hold in the mouth, although the rectangular shape might make that feel a bit funny.

Since the design of the JUUL e-cigarette is obviously proprietary, you won’t be able to use it with anything other than the intended cartridges. These come in four flavors — Tobacco, Menthol, Fruit and Creme Brulee — and in one nicotine strength, a whopping 59 mg. To put this into perspective, there are some e-liquid companies that don’t sell their products in strengths higher than 18 mg. That’s a huge difference. Each cartridge is designed to last for 200 puffs, which is also the expected life of a fully charged battery. Unlike many e-cigarettes that claim to deliver nicotine equivalent to that of a pack of cigarettes in each cartridge, the JUUL actually should be a one-to-one exchange for someone who currently smokes a pack of cigarettes per day.

Cartridges snap in to the top section of the JUUL e-cigarette battery, while the charging connection is on the bottom. If you have a notebook computer with side-mounted USB ports, you’ll find charging the JUUL e-cigarette quite convenient; simply plug the charger in and drop the battery into the magnetized connector. The battery’s light pulses during charging and turns solid green when charging is complete. To check the status of the battery, you can simply use the JUUL — the light turns red when the battery is nearly depleted — or tap the light twice. At the time of writing, PAX Labs charges $15.99 per four-pack of refill cartridges. All prices are discounted by 15 percent if you elect to have your cartridges shipped automatically, and PAX Labs also offers a one-time 25 percent discount on your first order if you sign up for the company’s mailing list.

In reviewing the JUUL e-cigarette, one of the first aspects that I found remarkable was the stylish and thoughtful design. The device is incredibly small and light, and I love the fact that I can charge it without dangling cords. Unlike virtually all e-cigarettes produced for the mass market, the JUUL is made in the United States. PAX Labs makes no claims about the e-liquid, though. While the e-liquid obviously contains PAX Labs’ patented nicotine base, the flavors themselves are unremarkable and taste like pretty much all mainstream e-liquids. The JUUL is trying to win you over with its convenience and unique nicotine hit; if you’ve ever tried another mainstream e-cigarette, don’t expect the flavor to differ greatly. 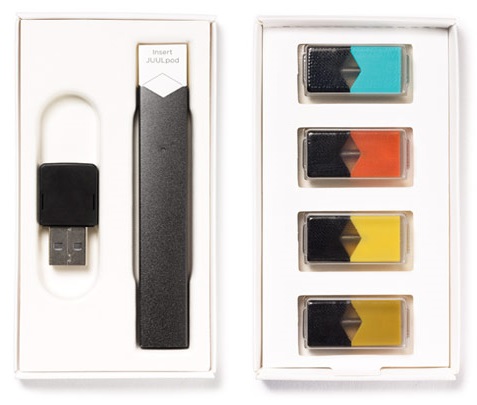 If you found this page by looking for a JUUL e-cigarette review, though, you probably aren’t curious about the flavor. It’s more likely that you want to know whether the e-liquid actually feels different from a “nicotine hit” standpoint than other e-liquids. It certainly does. I am half a decade removed from smoking now, and although I occasionally venture into the realm of higher-nicotine e-liquids, none of them have ever felt quite the same to me as the JUUL. Within seconds of using it, I immediately felt a “rush” and could tell that my cheeks were flushed. The difference is quite remarkable.

At the same time, I am not a new convert to e-cigarettes. I made that transition years ago — and it wasn’t always an easy one — with an L88B e-cigarette that used disposable cartridges. I transitioned through increasingly higher-powered devices until finally settling on the VaporFi VOX II that I use today. I am completely happy vaping e-liquids with strengths under 4 mg, which is to say that I’m not in a hurry to switch to something with over 50 mg of nicotine. 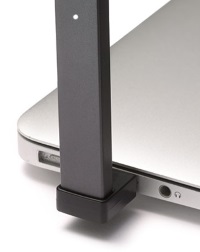 I don’t really believe that the JUUL is a product intended for me. Rather, it is for the many smokers who haven’t tried e-cigarettes yet, or who tried them and found the transition to vaping too difficult. The JUUL e-cigarette is convenient, user-friendly and produces a nicotine rush that you can really feel — certainly more than any other e-cigarette in its size range. It allows you to maintain blood-nicotine concentrations very close to what you would achieve with a real cigarette, eliminating the sometimes difficult transition from higher nicotine levels to much lower ones. If you haven’t tried an e-cigarette yet or haven’t been able to switch successfully, the JUUL is an excellent first step.

View the JUUL e-cigarette. The starter kit costs $49.99 and includes four refill cartridges. The JUUL includes a one year warranty and ships for free.