My experience suggests that the Joyetech eVic VTC Mini causes damage to batteries. As a result I cannot recommend this device. If you’d like some alternatives that feature temperature control functionality, take a look at the Volcano Lavabox ($169.99 and up) and the VaporFi VOX 100 ($175.99 with the automatic coupon embedded in my link).

About the Joyetech eVic VTC Mini 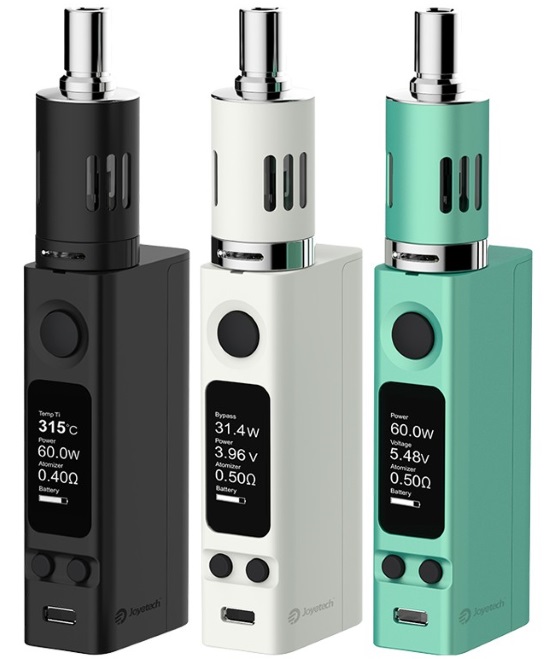 The outside of the Joyetech eVic VTC Mini has a coating that makes the device feel “softer,” for lack of a better word, in the hand. It isn’t rubberized, but it definitely feels more pleasing than raw metal and doesn’t attract pocket lint. This coating will chip if you drop the device on a hard surface, though, so be warned. The large OLED screen is probably the best I’ve seen on any personal vaporizer to date; the numbers are huge, and the large, rounded font is very easy to read.

The Joyetech eVic VTC Mini has 510 threading and will work with virtually any cartomizer, clearomizer, rebuildable atomizer or tank system you can throw at it. If your tank system or rebuildable atomizer has nickel or titanium wires, you’ll get the temperature control functionality, too. If you don’t have something with a wire material that supports temperature control, never fear — the VTC Mini includes an eGo One tank with both nickel and titanium atomizer heads. I found that the eGo One tank worked excellently, producing enormous volumes of vapor. On the negative side, though, it did tend to spray hot e-liquid on my tongue a bit more frequently than my usual tank, the VaporFi Volt Tank (Review). This was only a minor annoyance and overall my experience with the eGo One tank was excellent.

Because nickel and titanium have much lower resistance than the standard Kanthal wire used for most e-cigarette atomizers, some e-smokers subjectively find that they can achieve superior vapor production when using temperature control wires.

The more attractive feature of temperature control, though, is that it virtually eliminates the possibility of “dry hits.” If you’ve ever mistakenly let a sub-ohm tank or atomizer go dry, you know that dry hits can happen suddenly and are incredibly unpleasant — and occasionally painful. It even appears that they may produce dangerous compounds.

The eGo One tank produces plenty of vapor and holds quite a lot of e-liquid — about 4 ml. However, the majority of the glass tank is encased in metal for durability. This is a really good thing if you are prone to occasionally dropping your device, but it makes your remaining e-liquid a bit difficult to see. As a result, I’ve used my tank when dry about three or four times since I’ve owner the Joyetech eVic VTC Mini. The temperature control functionality worked exactly as advertised. Without any e-liquid to cool it, the coil overheated and the eVic VTC Mini instantly lowered its power. As a result, I never experienced a dry hit with this device.

Replacement coils cost $15.99 per five-pack from Volcano and $12.95 from DirectVapor.

The vast majority of the e-cigarette mods on the market use a twisting cap to secure the battery in place. This system generally works well, but I’ve found that some poorly lubricated devices may be prone to cross-threading. When this happens, a battery cap may become stuck or the threads might even break. Ultimately, cross-threading might even ruin your device.

The Joyetech eVic VTC Mini avoids this problem by using a magnetic battery cover. You use it by simply pushing the battery into the side of the device — the top terminal is spring-loaded to make this easier — and snapping the cover in place. In my experience, this system worked pretty well at first. The magnetic cover stayed firmly in place and didn’t rattle. I appreciated the fact that I no longer needed to bother with threading that was poorly machined and insufficiently lubricated.

After a month or so of using the eVic VTC Mini, though, I discovered that the magnetic battery cover has its own problems. The battery terminals obviously need to be tight in order to function properly, so the top terminal is spring-loaded to give you a bit of extra room. You’re supposed to push the battery into the top terminal and then slide the bottom into the compartment.

Unfortunately, though, I found that the top terminal didn’t travel quite far enough to provide sufficient clearance for the bottom of the battery. After several weeks of using the Joyetech eVic VTC Mini, I found that the constant scraping of the battery against the bottom terminal was causing the battery’s wrapper to peel away, exposing bare metal. One time, the VTC Mini even refused to fire — probably because of a short. Although regulated mods certainly add an extra measure of safety, using a battery with a potential short is an extremely bad idea.

Aside from the one glaring fault, the Joyetech eVic VTC Mini is a pleasure to use. The device feels great in the hand, the display is large and easy to read, the buttons have the ideal firmness and the temperature control functionality works exactly as advertised.

None of these features seem to matter very much, though, since my experience suggests that the eVic VTC Mini may damage batteries to the point where they are unsafe to use. I used the Joyetech eVic VTC Mini in conjunction with two different 35-amp 18650 batteries, each costing about $30. Within about a month, the wrappers of both batteries were damaged and had begun to peel.

Until now, I’ve never had an e-cigarette mod that caused damage to my batteries. This suggests to me that Joyetech’s magnetic battery system is not quite ready for prime time. Although you could circumvent this problem by installing a battery just once and charging it only with a USB cable, a peeling battery wrapper is a serious potential safety issue that should never happen in the first place. As a result, I can’t recommend buying the Joyetech eVic VTC Mini unless improvements are made.