There are several different e-cigarette companies vying today to become king of the sub-$30 e-cigarette market, but most of them do it with disposable e-cigarettes. You’ve probably seen more than a few of them online and in convenience stores. Disposables are a fine way to introduce yourself to e-smoking, but I think you’re much better off buying an e-cigarette with components you can keep. In this Envy NirVana review, I’d like to speak a bit about why I believe the NirVana is the best deal under $15 that you’ll ever find in the e-cigarette industry.

Thanks for stopping by! This is a fairly old product now, and I wouldn’t recommend it today as strongly as I did when I first wrote this review. Why not take a look at my list of the best e-cigarettes of 2016 instead?

About the Envy NirVana 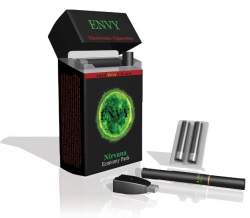 You can also get the Envy NirVana in an upgraded kit called the Premium Kit. The Premium Kit costs $37.46 with the coupon vapegrl and includes a battery, ten refill cartridges, USB and wall chargers and a portable storage case that can recharge your battery when it dies.

How the Envy NirVana Works

If you’ve ever seen an e-cigarette in person, you probably know that most of them are longer and thicker than real cigarettes. An unfortunate reality of battery technology is that battery life tends to correspond roughly with size. So, you end up with e-cigarettes such as the V2 Cig which can have batteries as long as 140 mm in order to maximize life and help the e-smoker avoid charging his or her battery ten times a day. 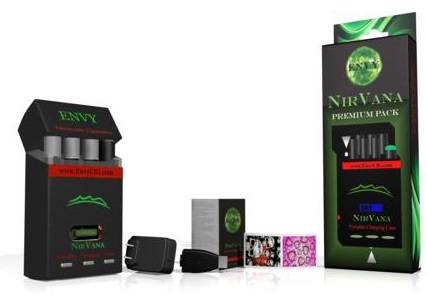 I think that the Envy NirVana is a good compromise between size and battery life. Although it’s the same length and thickness as the cigarette you’re smoking now, it actually has twice the capacity of other batteries with the same size — 180 mAh. For comparison’s sake, the Volcano Fine Electronic Cigarette has a capacity of 90 mAh and is the same size as the Envy NirVana battery. The longest V2 Cig battery has a capacity of 380 mAh and is quite a bit larger.

The Envy NirVana uses a two-part e-cigarette design, which is the simplest for new e-smokers to get used to. After you open the package, you’ll simply need to connect the battery to the charger and wait for the charge light to turn off, then connect a cartridge to the battery and puff just as you would with a real cigarette. It’s that simple. You’ll know when it’s time to recharge the battery because the light on the end will begin to blink. 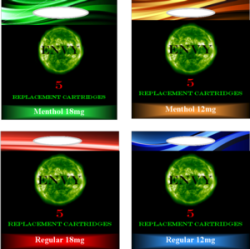 If you use the Envy NirVana full-time, you’ll need to begin thinking about buying refill cartridges within the first week unless you added a couple of refill packs to your order. Envy NirVana cartridges — also called “cartomizers” because each one contains its own heating coil to vaporize the nicotine liquid — cost $14.95 per five-pack and are available in Tobacco and Menthol flavors. My coupon code vapegrl applies to all Envy products, so you’re welcome to return here and buy through my link to save a few dollars. With the coupon, the price is $11.21 per five-pack.

If you decide that you’d like to branch out from the traditional Tobacco and Menthol flavors, it’s worth mentioning that although I believe the Envy NirVana is the best e-cigarette for the money, there’s nothing wrong with giving another company’s refill cartridges a try. Volcano’s pre-filled cartomizers work with the Envy NirVana, giving you a total of 24 more flavors to try.