Have you ever purchased a bottle of e-liquid that tasted a little — well, raw? Steeping is a common technique used within the vaping community to age e-liquid in a controlled manner. Proponents of this technique believe that e-liquid steeping helps the liquid’s different components mix together more fully, resulting in a smoother, more balanced flavor profile. In fact, they are right, though some people may have a slightly inaccurate understanding of what happens during the e-liquid steeping process.

You’ve probably heard the term “steeping” used most often when discussing tea. The actual definition of the term is to soak a solid in a liquid solvent, usually to extract its flavor or color. I’ve never quite understood why the term is used in relation to e-liquid; it seems to me that “aging” would be the more accurate term. Nevertheless, “steeping” is the term that the vaping community uses, and it has stuck.

During the years in which I have written about e-cigarettes, I would estimate that I have sampled somewhere in the neighborhood of 200 distinct bottles of e-liquid. In my opinion, every one of them tasted best the day it was opened. I thought that aging only caused their flavors to dissipate and become undetectable. I don’t dispute the idea that steeping can potentially change some e-liquids in positive ways, though. There might even be some cases when you would steep an e-liquid and I wouldn’t, because taste is subjective. Some flavors that I find desirable, you might find harsh or unpalatable. So, let’s learn about e-liquid steeping and find out how it might help or hinder your vaping experience. 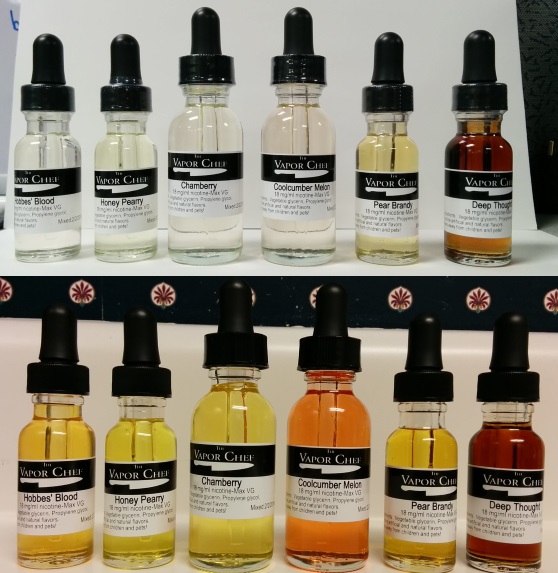 Six bottles of e-liquid, before and after 21 days of steeping. (Source)

What Happens During E-Liquid Steeping?

This article, written by Dr. Pearl Dickerson, contains a nice overview of the chemical process that occurs when steeping e-liquid. Simply put, an e-liquid contains different substances that resist being mixed. Steeping allows time for molecular bonding to take place, forcing its components to blend more thoroughly and form a more homogenized solution.

You’re probably aware of the fact that alcohol is used as a carrier for many different flavors and scents. As such, many e-liquids contain small amounts of alcohol. Because alcohol evaporates quickly, alcohol-based flavors dissipate during steeping. Nicotine also oxidizes during e-liquid steeping, causing the e-liquid to take on a darker color. In my research, I have been able to find any reliable information regarding the flavor or health impacts of nicotine oxidation. Since tobacco leaves are aged and allowed to oxidize before being made into tobacco products, I suppose we’ve all been exposed to plenty of oxidized nicotine anyway.

Do I Need to Steep My E-Liquids?

Definitely not. If you like the taste of an e-liquid the day that you open the bottle, there’s no reason to believe that allowing it to oxidize and evaporate will improve it at all. Although I have yet to ever try an e-liquid on the day it was mixed, no e-liquid that I have tried has ever tasted better to me than it did on the first day. If you buy small-batch craft e-liquids or shop at a local vape shop that mixes your e-liquids to order, you might have a different opinion. If you don’t love a bottle of e-liquid on the day that you buy it, you won’t do any harm by letting it rest for a few days before trying it again.

What E-Liquids Can Benefit From Steeping?

In my opinion, the most important process that takes place during e-liquid steeping is alcohol evaporation. Some people are sensitive to alcohol-based flavors in any form, while others have a strong dislike of any “perfume” notes in an e-liquid. If you have a negative experience with a bottle of e-liquid because of a preponderance of alcohol or perfume flavors, steeping the e-liquid might improve your opinion of the flavor. If you order e-liquids online from a merchant with a wide selection of e-liquids that are always in stock, it is likely that the e-liquid you want to buy has already been sitting in a warehouse for a while. Aging it further will probably provide no benefit.

How to Steep E-Liquid

Every person who prefers the flavor of steeped e-liquid has his or her own idea of the best way to do it. However, I have found that most people agree you should shake the bottle vigorously and frequently during the steeping process. This helps to accelerate the molecular bonding process that can result in a more homogeneous and smoother tasting e-liquid. It also aerates the e-liquid and helps harsher alcohol-based flavors to dissipate. Anything beyond this is largely a matter of personal preference. Keeping the bottle in a cool, dark place minimizes oxidation and helps you control the steeping process more finely. You can steep e-liquid in this way for weeks with little possibility of sudden flavor degradation. Some people prefer to accelerate the steeping process slightly by keeping the bottle open. I have even heard of some people using ultrasonic jewelry cleaners to vibrate bottles of e-liquid without adding heat.

If you’re looking for a dead simple guide to steeping e-liquid, though, all that you need to do is remember these four steps:

Some e-smokers prefer the flavor of an e-liquid that has been steeped for a very long time. For them, an e-liquid doesn’t hit its peak until it has gone through several weeks of aging at room temperature. However, not everyone has the space, time or budget to actually do this. Would you like to shorten the steeping time of your e-liquids? Apply heat! For example, some people like to steep e-liquid bottles in warm water baths. You might also consider placing e-liquid next to the exhaust vent of your computer. Bear in mind, though, that applying heat to a plastic bottle is rarely a good idea. A 2011 study of more than 450 common plastic items found that more than 70 percent of those items leeched estrogen-like chemicals when exposed to heat, alcohol or saltwater — even those containing no BPA. If you’re going to try using heat to accelerate the e-liquid steeping process, it really would be safest if you only used glass bottles.

The Day the E-Liquid Died

Whether or not you choose to steep e-liquid, you should know that it is entirely possible to go too far. Many times, I’ve put a bottle of e-liquid away for several months and forgotten about it. Invariably, I found the e-liquid to be nearly flavorless when I returned to it. This underscores the importance of regular tasting while you steep e-liquid. This helps you get an idea of how the flavor changes over time, because only you can decide when the flavor has peaked. Age an e-liquid for too long, and you’ll be left with something you don’t enjoy at all.