An e-cigarette PCC or portable charging case is one of the most common accessories you’ll find with a small electronic cigarette. This is partly a matter of convenience, as the smallest e-cigarette batteries won’t deliver more than 50 or so puffs between charges. I think that portable charging cases are also popular because they help with product differentiation, though; because the differences between e-cigarette kits are often minute, an e-cigarette PCC goes a long way toward branding a product and helping you remember it rather than someone else’s e-cigarette.

If you think you’re going to stick closer to the mainstream and buy an e-cigarette shaped like a real cigarette, a PCC is something that you might want to think about. Although two of the reasons might be a little obvious, the third reason is one that you might not have considered if you don’t own an e-cigarette yet.

E-Cigarette PCC: Should I buy one?

As I mentioned above, the smallest e-cigarettes give you the equivalent of only around 4-5 real cigarettes before you need to recharge them. If you typically spend a good part of the day out of the house and don’t have access to a USB port or wall outlet, an e-cigarette PCC bridges the gap until you’re able to get home.

2. An e-cigarette PCC protects your investment.

E-cigarettes are tiny and don’t burn. If you’re anything like many e-smokers, your natural tendency will be to carry your e-cigarette in your pocket when you’re outside the house. Unfortunately, the cartomizer threading can be a weak point in an e-cigarette. If you sit down the wrong way while carrying an e-cigarette in your pocket, you could bend it at the threading and ruin both components. A PCC prevents this from happening.

3. An e-cigarette PCC eliminates a point of failure. 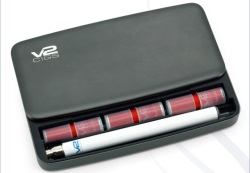 Shameless plug alert: Use the coupon code vapegrl for ten percent off any order from V2 Cigs.

Ability to Charge Other Devices 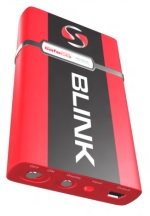 A lot of mobile devices such as your phone and iPod run on the same 3.7-volt power as your e-cigarette. It might seem like an obvious idea to build an e-cigarette PCC that can recharge external devices through a USB port, but the Safe Cig Blink PCC is the only case with this feature. This is a great idea because it turns a standard portable charging case into an emergency power solution for any type of device that accepts USB power. When the external power port isn’t in use, you can easily switch the case off to be certain that you’ll never be without power when your e-cigarette battery dies. Sadly, Safe Cig shuttered its doors in 2013. 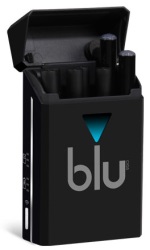 You’ve got to hand it to the folks at Blu; their innovative charging case has propelled a relatively ordinary e-cigarette to the stratosphere by offering something no other e-cigarette PCC has: the ability to help you find other e-smokers, or at least Blu e-smokers. When you enable the Social Features on a Blu charging case, the case actually vibrates when you stand near another Blu user. With millions of people already using e-cigarettes throughout the world, there’s a pretty good chance that you’ll make a new friend before long.