It’s been a trend among e-cigarette companies to offer increasingly cheap e-cigarettes in an attempt to beat one another to the lowest price point. In the end, it’s the consumer who wins; I love these e-cigarette “Express Kits” because they’re the most affordable way to try e-cigarettes while getting a product you can actually keep. Disposable e-cigarettes may be compelling products as well, but I much prefer these inexpensive e-cigarette kits for new e-smokers because you don’t have to throw the whole thing away when you’re done. Instead, you’ll have at least one battery and a USB charger that you can use with your next set of refill cartridges. I’ve used a huge variety of different products, and these are the best cheap e-cigarettes currently available.

Updated for 2015! Removed some deals that are no longer valid and added a few new ones — some of the cheapest e-cigarettes ever!

If you’ve ever looked for e-cigarettes in stores, you’re probably familiar with the NJOY King. The King is a disposable e-cigarette that earned high marks upon its release for its tiny size, squishy mouthpiece and high nicotine strength. The King is a great product, but it is also disposable and only good for a single use. The NJOY Recharge kit uses a similar design philosophy with a reusable device. While you still get the same flavors and high nicotine concentrations, the battery is just a bit larger for longer vaping times. If you want something with enough nicotine to provide a high degree of satisfaction — the Recharge cartridges top out at a massive 40 mg of nicotine — and don’t want to use a larger vaporizer, the NJOY Recharge kit is a great choice and a superlative value. 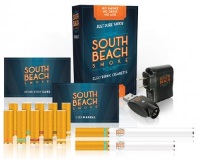 South Beach Smoke is among the oldest and best known e-cigarette brands in the United States. In the many years that they’ve done business, they’ve continually made improvements to their products. Prices have come down, and e-liquid production has moved to the USA. South Beach Smoke has also instituted a lifetime warranty and 30 day money-back guarantee. With this kit, you’re not just getting a great e-cigarette from a trusted brand — you’re getting in incredible value with enough refill cartridges to last quite a long time before you’ll need to buy more. 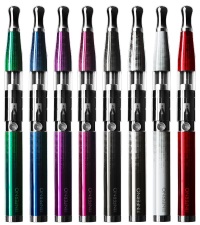 Volcano has never been short on style, and the Inferno e-cigarette in my opinion represents the culmination of the beloved eGo e-cigarette platform. The extremely nice 650 mAh battery has a pass-through function, allowing you to continue vaping while the battery charges — and the entire device, fully assembled, is only about as large as a narrow cigar. The Inferno’s heating coil operates with a resistance of 1.8 ohm for copious vapor, and Volcano sells replacement heating coils at just $12.99 per three-pack. I have always loved Volcano’s Inferno kit. My only knock against it was the $75 price tag. The Inferno Express Kit changes that, and if you’re looking for a cheap e-cigarette this is one of the best around. 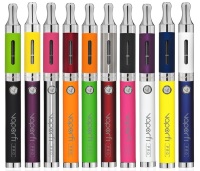 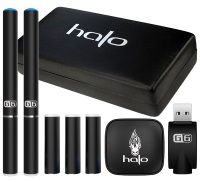 Halo Cigs has been a mainstay of the industry as long as I have used and written about e-cigarettes. Halo’s e-liquids are the primary reason for the company’s success, as other companies have found it difficult to duplicate Halo’s combination of creative flavor development and top-notch vapor production. Halo isn’t just in the business of creating e-liquids, though — they also have two of the best hardware values in the e-cigarette industry in the form of the G6 and Triton e-cigarettes. The Halo G6 features the simple two-piece design that’s ideal for beginners — simply screw the two halves of the e-cigarette together and enjoy — and with cartridges pre-filled with Halo’s terrific e-liquids, you can’t go wrong.