Apollo is a relatively new e-cigarette company that made a splash last year by announcing a massive giveaway. To catapult themselves into the public eye, Apollo planned to give free disposable e-cigarettes to one million smokers. I’m not sure if they ever got to the million e-cigarette mark, but the promotion certainly attracted plenty of attention. Today, Apollo is one of the best known of all e-cigarette brands, with a product line that features starter kits for every type of smoker. In this Apollo e-cigarette review, I’ll be discussing the various kits Apollo has on offer and explaining why you may or may not want to consider buying them.

Shop the selection of Apollo e-cigarette kits. Kits start at $54.95 and ship for free in the United States. Use the coupon code pay4less to save 20% on any purchase from Apollo. 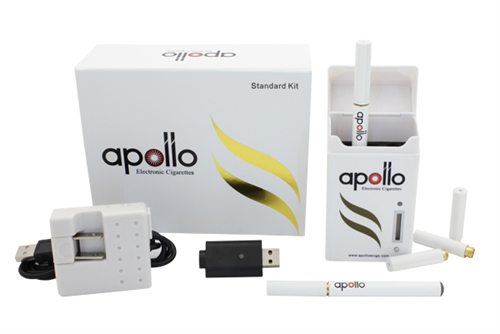 When it’s time to purchase your refills, Apollo sells Standard and Extreme refill cartridges in packs of five for $12.50 and $15.00 respectively. Apollo claims to manufacture all 23 of its e-liquid flavors in its own laboratory, meaning you shouldn’t be able to find exactly the same flavors with any other e-cigarette company. Testing my Apollo e-cigarette, I definitely believe this to be the case; I haven’t had quite the same experience with other e-liquids previously. I particularly enjoyed the Cherry Limeade flavor, which reminded me of my favorite beverage at a popular fast food joint. However, Apollo also sells empty cartridges for all of its e-cigarettes, meaning you’re free to experiment with e-liquids from other suppliers if you like.

All Apollo e-cigarettes include a 30-day money-back guarantee, meaning you’re free to return your e-cigarette for a refund or exchange if you decide you’re unhappy with it. Also, the non-disposable components of Apollo e-cigarettes such as the batteries and charging accessories carry a lifetime warranty. The warranty never expires, but Apollo does state that a component can be replaced a maximum of five times and warranty claims must be made within 60 days of your last order of $50 or more.

Priced at $54.95 at the time of writing, the Apollo Extreme Starter Kit is the best deal at the time of writing. It includes two batteries, five refill cartridges and USB, wall and car chargers. Given the fact that the Extreme Kit is less expensive than the Standard Kit, it would probably be wise to avoid the Standard Kit as it looks as though Apollo might be phasing it out of production. This would make sense, as the KR-808 e-cigarette model used in the Extreme Kit offers battery life and vapor production vastly superior to the 510 e-cigarette used in the Standard Kit. However, it must be said that the Extreme Kit doesn’t include a portable battery charging case. If this is a requirement for you, check out the V2 Cigs Ultimate Kit as an alternative.

One of the benefits of going with Apollo as an e-cigarette company is the fact that they make their own e-liquids. Some of my favorite flavors in their lineup include Classic Tobacco, Sahara and Cherry Limeade. If you like Apollo’s e-liquid selection, you’ll find it easy to step up to one of Apollo’s higher-end e-cigarettes if you decide you’re ready for something with longer battery life and higher vapor production. If you move up to the Apollo eGo, eSlim or VTube, you’ll be able to use the same e-liquids with your new e-cigarette.

It must be said, as well, that the Apollo VTube is an ideal step-up model for experienced e-smokers. It costs just $99.95 and is the same e-cigarette that Volcano once sold as the Lavatube. Although Volcano’s original Lavatube was a great bargain at $100, the new Lavatube is sold at a much higher price point and is a little harder to recommend. The VTube offers the same six-volt performance as the original Lavatube at a sub-$100 price point and I’d strongly suggest it to anyone looking for maximum vapor on a tight budget.

Shop the selection of Apollo e-cigarette kits. Kits start at $54.95 and ship for free in the United States. Use the coupon code pay4less to save 20% on any purchase from Apollo.

Most e-liquids contain vegetable glycerin, a sugar alcohol extracted from vegetable oil under high pressure. During the extraction process, the glycerin separates from the fatty acids and is absorbed into water. The solution is then distilled to increase the purity of the vegetable glycerin.