In case you haven’t noticed, Yocan has made a pretty big name for itself in the vaporizer industry over the past couple of years. With a steady stream of devices hitting the market in a variety of price ranges, Yocan is also easily one of the most prolific vaporizer makers in the world. That’s a great thing for the true vapor connoisseur; it means that Yocan’s always got something available with some unique feature designed to tempt you. In this comparison, we’re going to look at the Yocan Explore vs. the Yocan iShred. They’re both available at Lux Vapes.

As you’re about to learn, both of these devices have some pretty interesting design elements – and the Yocan iShred in particular has one feature you’re unlikely to find anywhere else. Let’s explore these devices in greater detail.

What’s Special About the Yocan Explore?

With its boxy shape and short mouthpiece sticking out from the top, the Yocan Explore looks a bit like the all-in-one box mods that used to be fairly popular in the e-liquid vaping world. That’s potentially an interesting feature if you want a vaporizer that you can use in public, because the people who see the Explore are highly likely to think that it’s just a regular box mod.

The Yocan Explore dry herb mouthpiece has a built-in stirrer; twisting the mouthpiece automatically stirs the herbs in the oven for even vaporization. It’s a somewhat unique feature that’s shared with the Yocan iShred.

What’s Special About the Yocan iShred? 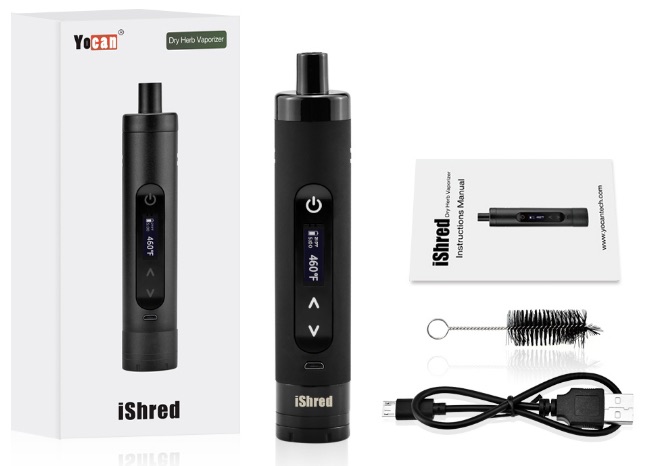 The Yocan iShred is a fairly standard dry herb vaporizer except for one completely unique feature: It has a built-in herb grinder. Just drop your herbs in and twist to break the herbs down for vaping. The iShred grinder even has a built-in pollen catcher that saves your tiny trichomes for later use. The grinder also doubles as a built-in storage solution for your herbs; you can keep one load of herbs in the device’s oven while carrying another load in the grinder.

If your decision about whether or not to buy the Yocan iShred depends on the quality of the grinder, you should probably skip this device. Given the inherent size limitations of an herb grinder that’s built into a vaporizer, the iShred grinder processes a very small volume of herbs compared to a standard entry-level grinder that you could buy at any vape shop. It’s also difficult to turn and not particularly sharp. You’ll probably be happiest if you relegate the iShred grinder to emergency duty for those times when you’re out and about and need a grinder on short notice.

The Yocan iShred is smaller than the Explore, but the two devices actually have very similar capabilities apart from the fact that the Explore can handle concentrates and the iShred works with dry herbs only. Both devices have battery capacities of 2,600 mAh and maximum temperatures of 460 degrees F. Though the Explore is larger than the iShred, Yocan didn’t use the increased size to make room for a larger battery. Instead, they designed the Explore to have better heat dissipation. We’ll cover that next.

The oven in a dry herb vaporizer can be positioned at the top or the bottom of the device. The oven position is a fairly important design decision because its effect on the vaping experience is enormous.

If the oven is at the top of the vaporizer, cleaning the device is generally a very simple affair; you can clean a top-oven vaporizer simply by scrubbing it with an alcohol-soaked cotton swab. With a top-oven vaporizer, though, the device’s mouthpiece is right above the oven. That’s great for big vapor clouds, but the heat from the oven has to be managed, or the vapor will be so hot that it’s simply not enjoyable.

The Yocan Explore and iShred both use top-oven designs, and as we just mentioned above, the Explore definitely does a better job of managing the heat coming from the oven. It draws air through multiple inlet channels when you inhale to ensure that the vapor remains cool and smooth regardless of your vaping temperature.

The enhanced airflow of the Explore does, however, have two small drawbacks. The first is that the air path isn’t completely pure; incoming air flows over some of the device’s internal electronics, which may potentially affect flavor. The second drawback is that some people have commented critically about the Explore’s performance when vaping concentrates. They say the temperature isn’t quite warm enough to get really nice clouds out of the device when using the concentrate mouthpiece.

The iShred, in comparison, doesn’t really do anything to manage the heat from the oven – and some people find the heat a bit too intense for higher-temperature vaping. That’s not going to be a problem for you if you enjoy lower vaping temperatures; you’ll probably appreciate the fact that the top oven position allows you to taste the flavors of your herbs very vividly. If you prefer higher-temperature vaping for maximum cannabinoid content, though, you’re probably going to want to attach a whip to the iShred’s mouthpiece because the vapor can tend to become a bit harsh.