I’ve always been a bit partial to Volcano; the first e-cigarette I ever purchased was the Volcano e-cigarette, and the e-liquid I buy every week is a Volcano e-liquid. Their higher-end products — the Inferno and the Lavatube — are excellent values for the money and I can definitely recommend them to experienced e-smokers looking for e-cigarettes with higher vapor production than what they’re currently using. I feel as though Volcano hasn’t done the greatest job of updating its entry-level product as the industry has evolved, though, and I’ll tell you why in my Volcano e-cigarette review.

Note: The Volcano Fine E-Cigarette is no longer available. Why not take a look at my article about the best e-cigarette for beginners instead?

View the Volcano Fine E-Cigarette at Volcano’s website or shop in Europe.

About the Volcano E-Cigarette

The Volcano e-cigarette includes two automatic batteries, USB and wall chargers, one pack of refill cartridges and a portable case that charges dead batteries. Fully assembled, the Volcano e-cigarette is the same size as a regular cigarette. Because of its small size — it has a charge capacity of 90 mAh — it’s likely that you’ll need to charge dead batteries several times every day.

This is where the charging case comes in handy; if a battery dies when you don’t have access to a USB port or power outlet, all you need to do is twist it into the terminal inside the case, press a button and wait an hour or so. The case also holds a fully assembled Volcano e-cigarette and up to five extra refill cartridges. Since Volcano’s charging case is the same size as a pack of cigarettes, it fits easily into a purse or pocket. Unfortunately, the rubberized surface of the case is a serious lint magnet.

In 2011, Volcano moved from the old-fashioned three-part e-cigarette design to a more convenient and reliable two-part design with atomized cartridges or “cartomizers.” The change was a good one; the Volcano e-cigarette is simple to use. Just twist a cartomizer into the battery and puff as if the e-cigarette were a real one. So, that’s the good news. Here comes the bad.

I have several problems with the Volcano e-cigarette. First of all, the price of $58.49 with a coupon code is a bit high for what you get. For example, South Beach Smoke ups the value proposition a bit with a higher-capacity battery and a wider variety of USA-made flavors. Volcano’s products are usually great values, but I think that the Volcano e-cigarette costs at least $20.00 too much.

My second problem is the battery — it’s actually one of the worst automatic batteries I’ve ever used. I can get it to turn on just by shaking it, which is a serious problem for pocket storage.  When I’m actually using the Volcano e-cigarette, though, the battery doesn’t seem sensitive enough. Its like I have to take several short puffs to get the battery going before I can really use it. Volcano’s pre-filled cartomizers do create plenty of vapor, but they wobble a little bit inside the battery, making the whole thing feel a little on the cheap side. 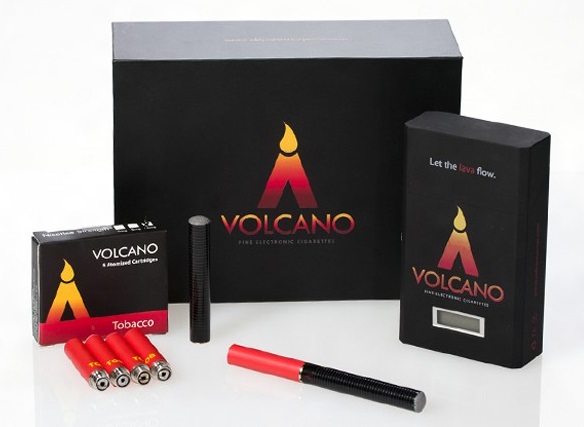 I’d be a lot happier with the Volcano e-cigarette if it provided more value for the money. When you consider other products in the same price range, I think that V2 Cigs really has the edge with the V2 Standard Kit, which costs $55.20 with the coupon code vapegrl15. V2’s offering includes twice as many cartomizers. Each cartomizer holds slightly more e-liquid than the cartomizers included with the Volcano e-cigarette. The batteries also have as much as four times the capacity of Volcano’s, although they’re admittedly a bit larger.

View the Volcano Fine E-Cigarette at Volcano’s website or shop in Europe.