When you step inside a well-stocked vape shop like The Vape Bar, you’re going to find a large and impressive selection of e-liquid. Almost every bottle on the shelves will have its ratio of vegetable glycerin and propylene glycol printed on the label. You might ignore the VG/PG ratios and simply choose your e-liquids based on how tasty the flavor descriptions sound – and with some vape tanks, that might work out fine. These days, many vapers are using high-end hardware like mesh coil tanks. E-liquid companies know that, and they try to develop vape juices that work with the widest possible variety of hardware. 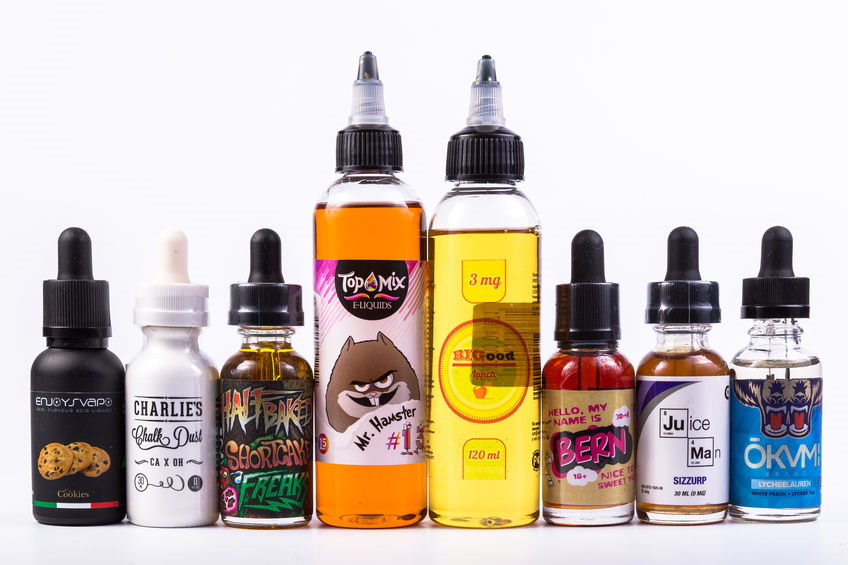 In other cases, though, buying an e-liquid simply because it sounds tasty can work out horribly. Have you ever bought an e-liquid that caused your vape tank to leak incessantly? Have you bought a juice that caused your tank to produce a burned flavor even though your coil was brand new? In both cases, an e-liquid with a VG/PG ratio that’s inappropriate for your tank is the most likely cause of the problem.

Let’s get you one step further on your journey toward knowing how to buy an e-liquid that’s perfect for your needs every time. This is your introduction to the world of VG/PG ratios in vape juice.

Why Do We Need Different VG/PG Ratios?

E-Liquid During the Early Years

To understand why different VG/PG ratios exist, it’s necessary to learn a bit about the history of e-cigarettes and other vaping hardware. In the beginning, glycerin wasn’t a standard ingredient in e-liquid at all; the earliest e-liquids contained only propylene glycol as a base. The only exceptions were 100-percent vegetable glycerin e-liquids sold mainly as specialty products for the few people who were allergic to propylene glycol.

As the vaping community evolved, people discovered different ways to vape. Dripping became popular among enthusiasts, for instance, and many of the people who preferred dripping found that they liked the thick, creamy clouds that VG-based e-liquids produced. Other members of the vaping community also wanted to experience those thicker clouds, but 100-percent VG e-liquids were too thick to work well with the cartomizers and clearomizers in common use at the time. Thus, e-liquid makers began blending VG and PG.

Owing once again to the small cartomizers and clearomizers in common use at the time, the earliest blended e-liquids had VG/PG ratios skewed heavily toward propylene glycol. VG/PG ratios such as 85/15 and 90/10 were common at the time. The e-liquids were thin enough to work with small tanks, but even a small amount of VG made a tremendous difference in perceived vapor production.

Today, 100-percent VG e-liquid is the preferred choice for many vapers who use atomizers designed for dripping. E-liquid containing only PG, on the other hand, is a niche product that few people want. The roles of VG and PG in e-liquid have been almost entirely reversed – and between those two extremes, you can find almost any VG/PG ratio that you want. Some specialty e-liquid companies will even let you select your own VG/PG ratio when you buy e-liquid.

So, now you understand why different VG/PG ratios exist. How can you tell what’s right for your vaping hardware? That’s what we’re going to discuss next.

What’s the Right VG/PG Ratio for My Vaping Device?

If learning about VG/PG ratios has left you feeling a bit overwhelmed, take heart because the most common ratio of 50/50 works very well with almost all vaping hardware released in the past few years. That’s because it’s usually in an e-liquid maker’s best interest to develop products that will work with the widest variety of hardware possible. In that sense, it’s usually fine to buy any e-liquid that appeals to you when you shop for vape juice. Suppose, however, that you want to tweak your VG/PG ratio for an even better experience. That’s what we’re going to discuss next.

Adjusting your VG/PG ratio in favor of VG changes your vaping experience by making your e-liquid thicker and by reducing throat hit. A high-VG e-liquid produces large, creamy vapor clouds. VG also has a slightly sweet flavor and can make some e-liquids taste sweeter when it’s used in high concentrations. Because high-VG e-liquids are so thick, though, they may not work well with smaller vaping devices. I’ll explain that shortly.

Adjusting your VG/PG ratio in favor of PG changes your vaping experience by making your e-liquid thinner and increasing throat hit. A high-PG e-liquid produces thin vapor clouds that dissipate quickly. Compared to VG, PG has less flavor of its own and helps the flavor of an e-liquid come through more clearly. Some tanks, however, may not work well with an e-liquid that’s too thin.

How to Know if Your E-Liquid Has Too Much VG

The atomizer coil in your vaping device has a cotton wick, and the coil assembly has holes that allow e-liquid to travel from the tank’s reservoir to the cotton. The smaller a vape tank is, the smaller the wick holes will be – and a very thick e-liquid may have trouble getting through those holes. If your e-liquid is too thick, you’ll experience harsh “dry hits” randomly when you vape, even if your tank or pod is full.

How to Know if Your E-Liquid Has Too Much PG

If you have a vape pen or box mod with a refillable tank, your tank’s atomizer coil assembly likely has fairly large wick holes to accommodate thicker e-liquids because most people these days buy e-liquids with at least 50 percent VG. If you use a high-PG e-liquid that’s too thin for your tank, the e-liquid will seep through the wick holes in the coil assembly and leak out the bottom of the tank.