The Social Smoking e-cigarette is a product unlike any I’ve ever reviewed. Although it’s about the same size as an L88 e-cigarette like the one sold by Blu Cigs, the threading extends out from the battery rather than being recessed into it. I believe that makes it a 401 model e-cigarette. This particular e-cigarette was gifted by a friend, and having never seen anything like it I was looking forward to giving it a try. How did this e-cigarette stack up? Find out in this Social Smoking review.

Note: The Social Smoking website has been taken offline, apparently for good. Why not take a look at my article about the best e-cigarette for beginners instead?

View the selection of starter kits at the Social Smoking website. Kits start at $27.97 and include a one-year warranty and 30-day money back guarantee. Social Smoking is accredited by the Better Business Bureau. 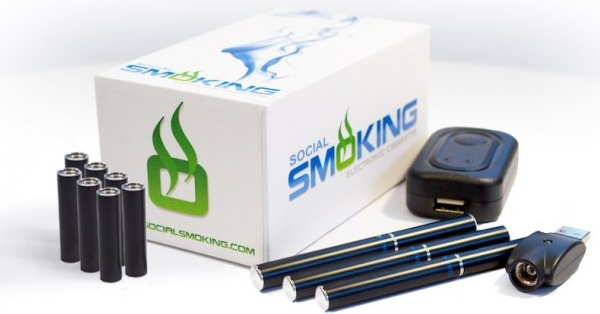 At first, Social Smoking struck me as “just another e-cigarette,” apart from the threading type that I’ve never seen before. However, other differences quickly began to become apparent. For example, the cover on the end of the battery appears metallic and opaque. When you use the Social Smoking e-cigarette, though, the cover lights up blue. The cartridges also have an unusual feel on the outside, like glossy painted metal. The lightness of the e-cigarette is also an interesting feature. If you’re one of those people who likes to let your cigarette hang from your mouth, you can’t do that with most e-cigarettes, but probably could with the Social Smoking e-cigarette.

Social Smoking’s e-cigarette kits range in price from $27.97 to $69.97. I received the $69.97 Deluxe Kit, which includes three batteries, ten cartridges and USB and wall chargers packed securely into a small box.

According to the official website, Social Smoking sources its e-liquids from a supplier in the United States. The refill cartridges are available in four flavors: Tobacco, Menthol, Tropical Punch and Caramel Latte. Since I only received the Tobacco flavor, it’s the only one I can comment on. Unfortunately, I didn’t really care for it. Although it’s made by an American supplier, it has the distinct chemical taste common among Chinese tobacco e-liquids. The vapor production is also a bit disappointing.

That being said, it’s entirely possible that Social Smoking’s other flavors are great — I just can’t recommend the tobacco. When you buy your refills, they’ll cost $10.50 per pack. Quantity discounts are also available.

In general, I think that Social Smoking’s prices on e-cigarette kits are quite reasonable. $69.97 for a kit with three batteries and ten cartridges is a better price than average. I don’t care for the carrying case, but it’s passable if you need something that can store a battery and a few spare cartridges.

Overall, I sadly can’t give the Social Smoking e-cigarette a strong recommendation. The price is great, and I love the styling. However, I wasn’t terribly pleased with the experience I had in the areas of flavor and vapor production. You also have to bear in mind that the 401 threading of the Social Smoking battery is unusual. Unless you purchase an adapter, you won’t be able to experiment with other companies’ refill cartridges. For that reason, you may be better off purchasing an e-cigarette with a more common threading type. For example, e-cigarettes and cartridges sold by Blu and Volcano are interchangeable. The V2 Cigs and Halo G6 e-cigarettes are also interchangeable. Choosing one of these brands gives you a lot more options when you want to try new flavors.

View the selection of starter kits at the Social Smoking website. Kits start at $27.97 and include a one-year warranty and 30-day money back guarantee.