Founded in 2008, Smokeless Delite is an older e-cigarette company that has managed to persevere and remain vital for four years in a changing industry. Smokeless Delite’s Premo e-cigarette starts at $29.95 and is designed to be as easy as possible for new e-smokers to simply pick up, charge, twist on a refill cartridge and begin e-smoking. All in all, I’m impressed with the product and believe it has some feature that may make you want to consider it over the competition. In my Smokeless Delite review, I’ll be describing those features and explaining how Smokeless Delite compares to the other e-cigarettes available. 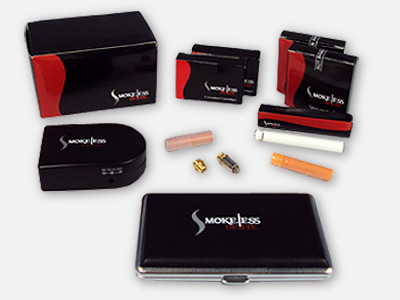 Smokeless Delite’s e-cigarette kits range in price from the $29.95 Premo Pleasure Kit to the $69.95 Elation Starter Kit. The Pleasure Kit includes a battery, atomizer and wall charger along with ten refill cartridges, while the Elation Kit includes two batteries, two atomizers, more charging accessories, 15 cartridges and a carrying case. You can buy refill cartridges whenever you like, but Smokeless Delite also offers an auto-ship program that sends cartridges automatically each month at a discount. The available flavors include Tobacco, Menthol, Energy Drink, Pineapple and Strawberry. Personally, I like the Tobacco and Pineapple flavors.

One fully charged Smokeless Delite battery will get you through about an hour of non-stop use. If you spread it out so each e-smoking session is about as long as smoking a real cigarette would be, then one charged battery is about the same as a half pack of cigarettes. One of the standard push-on cartridges should last through two battery charges, while the atomized “USA” cartridges will last slightly longer.

The benefit of using a small e-cigarette like the Smokeless Delite Premo is the fact that, as a smoker, you’ll feel completely comfortable with it. It’s the same size as a cigarette and works in the same way — just inhale to create vapor. The drawback is that you can get much better battery life from a larger battery such as the V2 Cigs battery. If you smoke more than half a pack of cigarettes each day, I strongly recommend choosing a Smokeless Delite starter kit that includes two batteries. Two fully charged batteries will give you the equivalent of up to a pack of cigarettes and will help you avoid downtime while you want for a dead battery to charge.