Sometimes I think that the e-smokers in the United Kingdom are really missing out. A lot of the e-cigarettes available in the UK seem to be slightly overpriced and, well, just not very good. I know there are a few prominent exceptions to this. For example, Totally Wicked, one of the largest e-liquid companies in the world by Web traffic, is based in the UK. Converting pounds to dollars, though, their prices seem quite a bit higher than what I’m used to seeing here. I’m also guessing that most people buy their first e-cigarette from a company known more for its hardware than its e-liquids. So what is the best e-cigarette in the UK? I haven’t found it yet, and I’ll tell you why in my Skycig review.

NOTE: Skycig has been purchased and this product is no longer available. Why not take a look at my article describing the best e-cigarette for beginners instead?

View the Skycig e-cigarette. It costs £49.99 and ships to the UK and Europe. 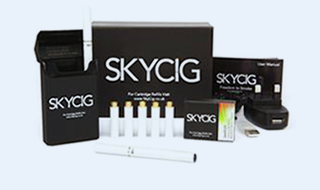 About the Skycig E-Cigarette

The Skycig e-cigarette uses the cigarette-sized L88 battery and atomized refill cartridges or “cartomizers.” It’s the same design as what Blu Cigs uses — in fact, the website and product packaging seem to resemble Blu’s quite a bit. Even the price is the same when you convert pounds to dollars.

With the Skycig e-cigarette kit, you receive two batteries, one pack of cartomizers, USB and wall chargers and a portable case that charges dead batteries. Here’s the strange thing about the Skycig, though: the case is the only accessory that directly charges batteries. The USB and wall chargers only charge the case. Usually, one of the benefits of having a charging case is the fact that it gives you another way to charge your batteries if the USB or wall charger in your starter kit fails. With the Skycig, if your charging case stops working, you’re sunk.

To get started with your Skycig e-cigarette, you’ll need to charge the case from a USB port or wall outlet; then screw a battery into the case and wait for it to charge. Unlike many charging cases, there isn’t a button to turn the case on or off. It begins charging immediately as soon as the battery is connected. When the charge cycle is complete — a light on the side of the case indicates this — unscrew the battery, screw in a cartridge and puff. You’ll get the equivalent of about 4-5 cigarettes from the Skycig e-cigarette before it’ll need another charge.

Unfortunately, here’s where I ran into my next problem with the Skycig e-cigarette; I wasn’t impressed with any of the five flavors included with my sample pack of cartomizers and most of them produced very little vapor. I received two different tobacco flavors along with menthol, cherry and vanilla. They’re all sort of run-of-the-mill, uninspiring Chinese e-liquid flavors, and with the poor vapor production, you’re really going to have to do some serious puffing to get any kind of satisfaction out of the Skycig e-cigarette.

This brings me to my final problem with the Skycig e-cigarette: the poor value of the refill cartridges. Every pack costs £8.95, or $14.00 USD. Each of these tiny L88 cartridges is barely the equivalent of a half pack of cigarettes, so you’ll be ordering more before you’ve finished your first week as a Skycig e-smoker — and at that price, the savings compared to smoking won’t be anywhere near what they could be.

Compare this price to V2 Cigs, another US-based company that ships to the UK. Because the V2 e-cigarette is slightly larger than the Skycig e-cigarette, the cartridges are wider and hold about 25 percent more e-liquid. Yet, the price per five-pack of cartridges is only £6.27 at today’s exchange rate. If you buy in bulk to save on your shipping costs and use the coupon code vapegrl for a 10 percent discount, you can get the price as low as £3.89 per pack. Why would you want to pay more than double for less e-liquid?

Incidentally, the V2 Standard Kit includes twice as many cartridges as the Skycig e-cigarette, doesn’t have the fussy charging case and costs £34.79 at today’s exchange rate after you apply the coupon code vapegrl15, which is good for a 15 percent discount on any V2 starter kit. Considering the higher quality of V2’s product and the amount of money you’d save in the long run, I think it would be worth waiting a couple of extra days for shipping.

To me, it’s almost as though Skycig’s creators set the website up a few years back and left it alone to continue making money while they moved on to other ventures — because Skycig is just a bit antiquated by modern standards. Between the clunky charging case, the sub-par vapor production, the poor selection of flavors and the high price for what you receive, the Skycig e-cigarette looks to me like a product that would have made a lot more sense in 2009 than it does now. From the standpoint of value for money, I’m not impressed with Skycig.

Buy the Skycig e-cigarette or look at my suggested alternative, the V2 Cigs Standard Kit.