Thanks for stopping by! This article is a bit old now. Maybe you’d like to see my list of the best e-cigarettes of 2016 instead?

As long as e-cigarettes have been available in the United States, it has been next to impossible to find truthful information about them. On one side, you’ve got pushy affiliates whose only goal is to make money from your purchase. On the other side, you’ve got marketers who buy old domains and fill them with outdated e-cigarette content to capture as much search engine traffic as possible. How does anyone manage to find honest e-cigarette reviews in 2014? If you’ve made it here, you’ve taken an excellent first step. In this article, I’m going to put my four years of e-smoking experience to use and break down the best e-cigarettes of 2014 for every type of smoker. I hope you enjoy the article and find it useful — and feel free to contact me on Facebook if you have a question that isn’t answered here.

Best E-Cigarette of 2014: The Complete Beginner

Coupon: vapegrl15: 15% off order containing a starter kit, vapegrl: 10% off all other orders

V2 Cigs is, quite simply, the best introduction to e-smoking that a person could possibly hope for. There are so many reasons for this opinion that I’ve devoted an entire article about the best e-cigarette for beginners to them. In short, V2 Cigs occupies the top position among the best e-cigarettes of 2014 because they’re constantly evolving and finding ways to serve their customers better. This is a company that does so many of the little things right that I struggle to find the most important details to discuss in such a short article.

In an industry so full of copycats, what makes V2 Cigs the best? How about the lifetime warranty, or the fact that V2 tests all of its e-liquids in a lab and makes the reports available to the public? Maybe it’s something even smaller, like the foil-sealed cartridges that never arrive dry and stale, or the best designed portable charging case I have ever used. I’d also be remiss if I didn’t mention the performance of V2’s e-cigarettes — with batteries tuned to 4.2 volts instead of the standard 3.7, V2 has a product that’s shaped like a tobacco cigarette but generates as much vapor as much larger e-cigarette models. If you’ve never owned an e-cigarette before, V2 Cigs is without question the best introduction to e-smoking. I can recommend them without hesitation whether you’re a social smoker or a long-term tobacco user.

Best E-Cigarette of 2014: The Budget Shopper

Coupon: Applied automatically upon clicking (12% off) 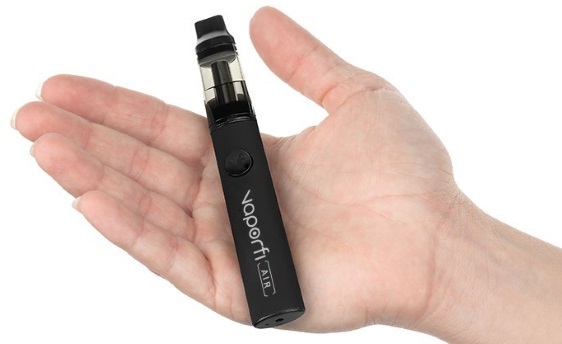 So, you might be here because money is a little tight and you’re exploring your options for cutting your living expenses as much as possible. If you’re looking for the least expensive option for switching from tobacco to e-cigarettes and don’t want to end up with a lemon, give the VaporFi Air a try. About $35 gets you a starter kit with a high-capacity battery, a USB charger and an e-liquid tank capable of lasting a month or more before you’ll need to replace it. Just remember to charge the battery at the end of the day and you may not even need to buy a spare.

Best E-Cigarette of 2014: The Heavy Smoker

A very heavy smoker has nicotine needs that can’t be satisfied easily by an e-cigarette. If this is you, you already know — you consume more than a pack of cigarettes each day and might have even resorted to rolling your own cigarettes to keep the expenses under control. You might be the type of smoker who needs the cost savings of e-cigarettes most of all, and you need some serious battery capacity — even the single 650 mAh battery included with the Stems Cigs starter kit isn’t going to cut it. You also need an assertive e-liquid that mimics the strong throat and lung sensation of real tobacco.

For a heavy smoker, the Halo Triton is my pick for the best e-cigarette of 2014. This is a kit that includes not one, but two 650 mAh batteries as well as two high-vapor e-liquid tanks. As long as you remember to charge one battery while you’re using the other, you can be an absolute chain smoker and you still won’t have to worry about not having your e-cigarette available when you need it.

Halo Cigs is also the only company on this list that produces its own e-liquids. Since the company was launched, Halo has consistently been the top rated e-liquid maker in the United States because they understand the needs of true tobacco lovers. With no less than 12 tobacco flavors and four menthol flavors, Halo takes its e-liquid seriously. Combine the Triton e-cigarette with Halo’s e-liquid and you’ll get a product that truly mimics the taste and sensation of real tobacco and satisfies even the most demanding nicotine cravings all day.

Best E-Cigarette of 2014: The Advanced E-Smoker

As long as the ProVari Mini has been around, I continue to scratch my head in amazement at the amount of power that ProVape managed to cram into such a small package. This amazing e-cigarette is less than four inches long and under and inch thick, and yet it’s the only variable-voltage e-cigarette that manages to produce a full six watts of power throughout the entire life of the battery. If you’ve been an e-smoker for a while, you’ve probably seen less expensive options that bear more than a passing resemblance to the ProVari. I’ve tried them, and I’m here to tell you that there’s no comparison — not only is the build quality of these ProVari alternatives often extremely poor, but they can’t generate six volts of power even on a full battery charge.

Of course, you can’t discuss the ProVari and ProVari Mini without mentioning the price — slightly over $200 if you need a full starter kit, which includes the ProVari, two batteries, a charging system and an e-liquid tank. However, what you’re paying for is the absolute best performance currently available from an e-cigarette, bar none. You’re also paying for the quality that comes with a product designed and manufactured in the United States. Need a firsthand example of that quality? I purchased my first ProVari in January 2012. I use it every day and it still works perfectly.

It has to be said that the ProVari probably isn’t the best choice for you if you’ve never used an e-cigarette before. Most e-smokers will never need to use the ProVari’s full six volts of power, and the ProVari also has a learning curve that can take a bit of time to master. In terms of quality and performance, though, there’s no better e-cigarette on the market. The ProVari probably shouldn’t be your first e-cigarette, but it’s likely to be your last.

In 2014, Altria — the maker of Marlboro e-cigarettes — announced that it would be buying Green Smoke for $110 million. The purchase price was based in part on Green Smoke’s claim of having earned $40 million in 2013.